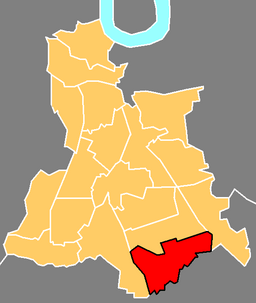 Downham is a suburban district located in south east London, within the London Borough of Lewisham. It is located north of Bromley.

Downham was named in honour of Lord Downham, who was chairman of the London County Council between 1919-20.

The Prime Meridian passes just to the west of Downham.

Before 1920, the area had no houses, apart from a shooting range close to Rangefield Road and areas of farmland in the period around 1890. Some belonged to Holloway Farm and others to Shroffolds Farm. Following the First World War, local boroughs like Deptford, Bermondsey as well as the London County Council [LCC] felt it was essential to reduce overcrowding by erecting more residential property. This needed to excel that which was provided by private landlords. The final spur for LCC to commence works in the area was the new law of 1923 that provided government funding to enable residential developments to be built by local governments. As a result, the Downham Estate was developed towards the end of the 1920s by the London County Council.

The area of the estate was in the region of 522 acres (2.1 km²), with 461 acres (1.9 km²) in the Metropolitan Borough of Lewisham, (from 1965 the London Borough of Lewisham) and 61 acres (0.2 km²) in the Municipal Borough of Bromley (from 1965 the London Borough of Bromley); the estate stretched for about 1.25 miles (2 km). Prior to this, most of the terrain was countryside. However parts around Grove Park railway station to the east had already begun to experience some building works. In this territory which was the then furthest extreme of London, 5659 homes of different sizes were built. 408 apartment complexes of four storeys were also erected.

At the time of development, the area was considered ‘a showpiece, a cottage estate'. With less than 20 houses to an acre, and lots of greenery and shops, the area was of relative low population density. An official Lewisham publication around 1930 considered Downham to be ‘a Garden City’.

Downham estate in the 1920s

Those who were the first to live on the Downham estate late in the 1920s had mostly been relocated from certain less pleasant parts of the inner city like Rotherhithe and East London, and these new homes were of a much higher standard than their previous homes.

The arrival of new people in the Downham area led to some unexpected results. In order to show their objection, in 1926 those who lived in Alexandra Crescent (at that time, a private street) in Bromley had appointed Albert Frampton, who had developed Alexander Crescent, to build a dividing wall. This was because the wealthier private home owners in Bromley wanted to prevent the working class 'vulgar people' from the Downham estate from accessing the neighbouring middle-class area. They also wanted to prevent them from using this as an access route into the town centre of Bromley. He made a formal application to Bromley Council on 16 February 1926 to build the dividing wall. The application was due to strong demands by those who lived his estate. The council refused to take a decision on the application, but the brick wall was built nonetheless. It was across Valeswood Road at its junction with Alexandra Crescent and was known as a ‘class wall’. It was seven feet high and was fortified at the top with broken pieces of glass.

That pre-war class wall was a stark reminder of the great increase in gated communities, barrier-walls and the use of private security by wealthier people in various parts of the growing metropolis.

Meanwhile, life carried on progressing in Downham as the first Shopping Week took place in June 1929, and both the Downham Tavern and Splendid Super Cinema opened in 1930.

By the 1930s, lack of clarity had arisen in regard to responsibilities in relation to the dividing class wall following complaints by LCC to authorities at Lewisham Council. The Town Council of Bromley was firm in its decision not to take down the wall, and curiously neither the LCC nor Lewisham Council felt able to do it either. There were many arguments and controversies about this class wall for close to 25 years. Eventually Bromley Council removed it in 1950 by which time World War 2 had ended. Action was taken largely because passage routes were required for the fire engines.

Despite this minor glitch, the Downham Estate illustrates the nature of developments of council housing in Britain in the period between the first and second world wars.

Among many new developments, Downham Health Clinic opened in Churchdown Road in 1932, Good Shepherd School opened in Moorside Road in 1933, Beckenham Place Park Recreation Area opened in 1936, and both the Downham Library and the Swimming Pool were opened to the public in June 1937.

Downham is bordered by Grove Park, Plaistow, Bromley Hill, Beckenham, Bellingham, Southend and Whitefoot. Lying between Catford and Bromley, and having Downham Way as the apparent arterial road, Downham is a very busy localised town centre, selling everything from car parts to Indian food, and fishing tackle to a local locksmith. Downham is also served by Forster Memorial Park, Beckenham Place Park and Downham Fields. While the area has recently lost Woolworths and all its banks such as Natwest, Woolwich and finally Barclays, new facilities include Downham Sports and Leisure Centre as well as a Tesco Local. Marks and Spencers now serves as the grocery shop at the BP station which stands on the spot where the once vibrant 2244-seater Splendid Cinema was in the 1930s. A brand new Iceland (supermarket) store opened on 8 March 2014.

In terms of regeneration and development, there have been some recent opportunities in the area. Neighbourhood Renewal Unit and Lewisham Strategic Partnership have been implementing many projects in the area which include Housing and Environment, Health, Crime and Community Safety, Neighbourhood Management, Community Development, Children and Young People and Employment and Enterprise.

The main through-road (double carriageway for most parts) is the A21 Bromley Road, which if followed southbound would lead through Bromley Town Centre down to Hastings some 55 miles away on the East Sussex Coast.

All content from Kiddle encyclopedia articles (including the article images and facts) can be freely used under Attribution-ShareAlike license, unless stated otherwise. Cite this article:
Downham Facts for Kids. Kiddle Encyclopedia.