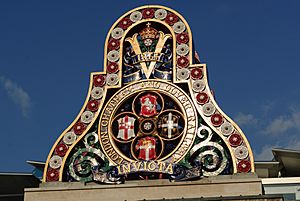 Badge of the London, Chatham and Dover Railway on Blackfriars Bridge

The London, Chatham and Dover Railway (LCDR) was a railway company in south-eastern England (registered 1 August 1859). It was previously called the East Kent Railway.

Its lines ran through London and northern and eastern Kent to form a part of the Greater London commuter network. The railway was always in a difficult financial situation. It went bankrupt in 1867 but was able to continue to operate. Many of the difficulties were caused by competition and duplication of services with the South Eastern Railway (SER). However, in 1898 the LCDR agreed with the SER to share the operation of the two railways and work them as a single system under the name South Eastern and Chatham Railway. Receipts were pooled but it was not a full amalgamation.

The SER and LCDR remained separate companies until they became part of the Southern Railway on 1 January 1923 (Railways Act 1921).

All content from Kiddle encyclopedia articles (including the article images and facts) can be freely used under Attribution-ShareAlike license, unless stated otherwise. Cite this article:
London, Chatham and Dover Railway Facts for Kids. Kiddle Encyclopedia.