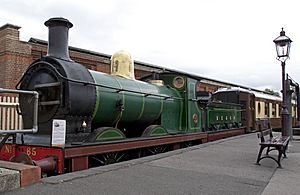 The South Eastern and Chatham Railway (SECR), was a working union of two neighbouring railways, the South Eastern Railway (SER) and London, Chatham and Dover Railway (LCDR), which operated between London and south east England. Between 1899 and 1923, the SECR had a monopoly of railway services in Kent and to the main Channel ports for ferries to France and Belgium. In 1923, the SECR became a part of the Southern Railway under the Railways Act 1921.

All content from Kiddle encyclopedia articles (including the article images and facts) can be freely used under Attribution-ShareAlike license, unless stated otherwise. Cite this article:
South Eastern and Chatham Railway Facts for Kids. Kiddle Encyclopedia.