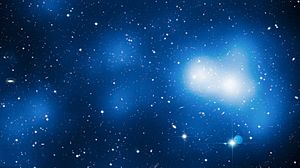 A massive galaxy cluster named MACS J0717.5+3745, which may be similar to the Hercules–Corona Borealis Great Wall.

The Hercules–Corona Borealis Great Wall is the largest known super-structure in the universe.

It was discovered in November 2013 by mapping gamma-ray bursts. They are very luminous explosions of distant, massive stars, the most powerful explosions in the universe. A typical burst releases more energy in less than a tenth of a second than the Sun will in its whole life of 10 billion years.

Gamma-ray bursts are very rare: only one happens in a typical galaxy every few million years. The stars which cause these explosions are very massive, so the material required for them to be formed must be in great amounts. So, these explosions can be used to track down if there is a galaxy in that direction, or there is a large group of matter in there.

Between the years of 1997 to 2012, astronomers mapped these bursts in the sky, with the help of the robotic satellites Swift and Fermi which looks for gamma-ray bursts and measures their redshifts. In the map they produced, they noticed something interesting; 14 gamma-ray bursts have very similar redshifts and are very close to each other. This means that there is a very large group of galaxies and matter in the region. They say, from measuring these bursts, comes up with a very large structure measuring 10 billion light-years in diameter.

All content from Kiddle encyclopedia articles (including the article images and facts) can be freely used under Attribution-ShareAlike license, unless stated otherwise. Cite this article:
Hercules–Corona Borealis Great Wall Facts for Kids. Kiddle Encyclopedia.