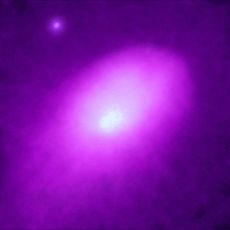 It has no first magnitude stars. Its brightest star, α CrB (Alphecca, also known as Gemma) is of magnitude 2.2 (slightly variable) and is considered a member of the diffuse Ursa Major Moving Group. The constellation contains several interesting variable stars: two of the best known are R Coronae Borealis and T Coronae Borealis.

Corona Borealis contains no bright deep sky objects. Abell 2065 is a highly concentrated galaxy cluster containing over 400 members, the brightest of which are of 16th magnitude.

Corona Borealis was sometimes considered to represent a crown that was given by Dionysus to Ariadne, the daughter of Minos of Crete. At other points it was considered to belong, in a sense, to Boötes, the herdsman, or the keeper of the bears. The Cheyenne tribe called it "Camp Circle" and arranged their camps in a semicircle.

All content from Kiddle encyclopedia articles (including the article images and facts) can be freely used under Attribution-ShareAlike license, unless stated otherwise. Cite this article:
Corona Borealis Facts for Kids. Kiddle Encyclopedia.