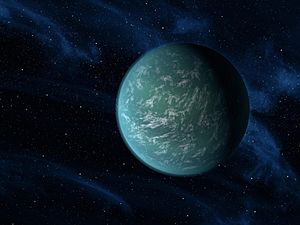 Kepler-22b is an extrasolar planet orbiting (going around) G-type star Kepler-22. It is located about 600 light years away from Earth in the constellation Cygnus. It was found by NASA's Kepler Space Telescope. It is also the first known planet to orbit within the habitable zone of a Sun-like star.

Kepler-22b's first transit in front of its host sun was observed on Kepler's third day of scientific operations in mid-2009. Kepler-22b's third transit was detected in late 2010. The Spitzer Space Telescope provided more data that confirmed Kepler-22b's transits. On December 5, 2011, the confirmation of the existence of Kepler-22b was announced. 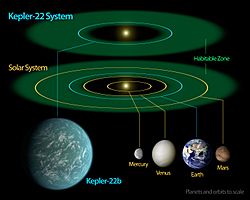 A diagram of the Kepler-22b System, compared to our Inner Solar System.

It is thought that the object has a mass similar to that of Neptune (~35 Earth masses). Another possibility is that Kepler-22b is an "ocean-like" world. It might also be comparable to the water-rich planet GJ 1214 b although Kepler-22b, unlike GJ 1214 b, is in the habitable zone. If it has an Earth-like composition, the compression of material in the interior of the planet would give an overall mass greater than 40 Earth masses. Such a planet would also produce surface gravity greater than 7 times that on Earth. This is ruled out to at least 1-sigma uncertainty by radial velocity measurements of the system, suggesting Kepler-22b does not have Earth-like composition. It is likely to have a more volatile-rich composition with a liquid or gaseous outer shell; this would make it similar to Kepler-11f, the smallest known gas planet.

"If it is mostly ocean with a small rocky core," Natalie Batalha, one of the scientists on the project, speculated "it's not beyond the realm of possibility that life could exist in such an ocean." This possibility of life has spurred SETI to perform research on top candidates for extraterrestrial intelligence. However, if the planet's carbon cycle has ceased due to lack of oceans and plate tectonics, Kepler-22b may turn out to be a searing, sterile super-Venus.

The only parameters of the planet's orbit that are currently available are its period, which is about 290 days, and its inclination which is approximately 90°, so that it transits the disk of its star as seen from Earth.

No information is available about the shape of the planet's orbit. Many extrasolar planets are known to move in highly elliptical orbits. We only know that the semi-major axis of its orbit is within its host star's habitable zone. If Kepler-22b has a highly elongated orbit it may well only spend a small fraction of its time within this habitable zone, which would cause extreme temperature differences on the planet and make it inhospitable.

In order to obtain information about the shape of the planet's orbit, other methods of planetary detection, such as the radial velocity method, need to be used. While such methods have been performed on the planet after its discovery, they have not yet detected what the orbital eccentricity of the planet actually is, and have as of March 2012 only set an upper limit on the mass of the planet.

Scientists can estimate the possible surface conditions as follows:

All content from Kiddle encyclopedia articles (including the article images and facts) can be freely used under Attribution-ShareAlike license, unless stated otherwise. Cite this article:
Kepler-22b Facts for Kids. Kiddle Encyclopedia.