Kepler-452b (a planet sometimes quoted to be an Earth 2.0 or Earth's Cousin based on its characteristics; known sometimes as Coruscant by NASA, also known by its Kepler Object of Interest designation KOI-7016.01) is an exoplanet orbiting the Sun-like star Kepler-452 about 1,402 light-years (430 pc) from Earth in the constellation Cygnus.

It was identified by the Kepler space telescope, and its discovery was announced by NASA on 23 July 2015. It is the first potentially rocky super-Earth planet discovered orbiting within the habitable zone of a star very similar to the Sun.

The planet is about 1,400 light-years away from the Solar System. At the speed of the New Horizons spacecraft, about 59,000 km/h (37,000 mph), it would take approximately 26 million years to get there. 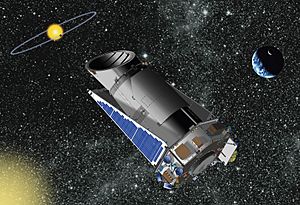 Kepler-452b has a probable mass five times that of Earth, and its surface gravity is twice Earth's, though calculations of mass for exoplanets are only rough estimates. If it is a terrestrial planet, it is most likely a super-Earth with many active volcanoes due to its higher mass and density. The clouds on the planet would be thick and misty, covering much of the surface as viewed from space. All of the planets components would be the same if it is as we predicted it to be.

The planet takes 385 Earth days to orbit its star. Its radius is 50% bigger than Earth's, and lies within the conservative habitable zone of its parent star. It has an equilibrium temperature of 265 K (−8 °C; 17 °F), a little warmer than Earth. 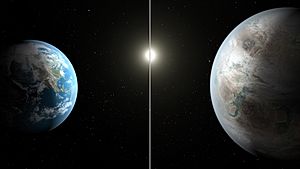 Artist's concept compares Earth (left) to the new planet, called Kepler-452b, which is about 60 percent larger

The host star, Kepler-452, is a G-type star that is about the same mass of the Sun, only 3.7% more massive and 11% larger. It has a surface temperature nearly the same as Earths Sun. The star's age is estimated to be about 6 billion years old, about 1.4 billion years older than the Sun, which is 4.6 billion years old. From the surface of Kepler-452b, its star would look almost identical to the Sun as viewed from the Earth.

Kepler-452b orbits its host star with an orbital period of 385 days, nearly the same as Earth's. Its host star, Kepler-452, is about 20% more brighter than the Sun. Kepler-452b is not tidally locked. Kepler 452b's [pellipse]] has a nearly circular orbit 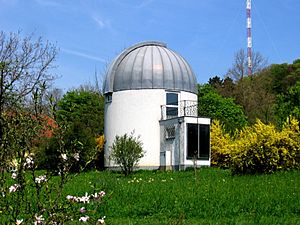 The public Johannes-Kepler-Observatory in Linz, Austria

At this point in its star's evolution, Kepler-452b is receiving 10% more energy from its parent star than Earth is currently receiving from the Sun. If Kepler-452b is a rocky planet, it may be subject to a runaway greenhouse effect similar to that seen on Venus.

However, due to the planet being 60% bigger than Earth, it is likely to have an estimated mass of 5 earth mass, which could allow it to hold on to any oceans it may have for a longer period, preventing Kepler-452b from submitting to runaway greenhouse effect for another 500 million years. This could allow any potential life on the surface to inhabit the planet for another 500–900 million years before the habitable zone is pushed out of Kepler-452b's orbit. 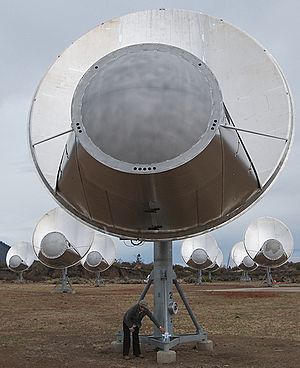 Front view of one antenna of the Allan Telescope Array, a radio telescope for combined radio astronomy and SETI (Search for Extraterrestrial Intelligence) research

Scientists with the SETI (Search for Extraterrestrial Intelligence) Institute have already begun targeting Kepler-452b, the first near-Earth-size world found in the habitable zone of a Sun-like star. SETI Institute researchers are using the Allen Telescope Array, a collection of 6-meter (20 feet) telescopes in the Cascade Mountains of California, to scan for radio transmissions from Kepler-452b. As of July 2015, the array has scanned the exoplanet on over 2 billion frequency bands, with no result. The telescopes will continue to scan over a total of 9 billion channels, searching for alien radio signals.

Ryan Weed from Positron Dynamics says that with a spacecraft accelerating at a constant 1 g up to a velocity of 0.9995 c and due to time dilation we could reach Kepler-452b in 12 years, although from Earth perspective 1,500 years would have passed.

All content from Kiddle encyclopedia articles (including the article images and facts) can be freely used under Attribution-ShareAlike license, unless stated otherwise. Cite this article:
Kepler-452b Facts for Kids. Kiddle Encyclopedia.