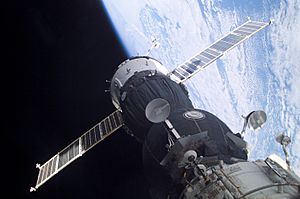 Time dilation explains why two working clocks will report different times after different accelerations. For example, at the ISS time goes slower, lagging 0.007 seconds behind for every six months. For GPS satellites to work, they must adjust for similar bending of spacetime to coordinate with systems on Earth

According to the theory of relativity, time dilation is a difference in the elapsed time measured by two observers, either due to a velocity difference relative to each other, or by being differently situated relative to a gravitational field.

Such time dilation has been repeatedly demonstrated, for instance by small inconsistencies in a pair of atomic clocks after one of them is sent on a space trip, or by clocks on the Space Shuttle running slightly slower than reference clocks on Earth, or clocks on GPS and Galileo satellites running slightly faster.

Time dilation has also been the subject of science fiction works, as it technically provides the means for forward time travel.

Theoretically, time dilation would make it possible for passengers in a fast-moving vehicle to advance further into the future in a short period of their own time. For sufficiently high speeds, the effect is dramatic. For example, one year of travel might correspond to ten years on Earth. Indeed, a constant 1 g acceleration would permit humans to travel through the entire known Universe in one human lifetime.

With current technology severely limiting the velocity of space travel, however, the differences experienced in practice are minuscule: after 6 months on the International Space Station (ISS) (which orbits Earth at a speed of about 7,700 m/s) an astronaut would have aged about 0.005 seconds less than those on Earth. The cosmonauts Sergei Krikalev and Sergei Avdeyev both experienced time dilation of about 20 milliseconds compared to time that passed on Earth.

All content from Kiddle encyclopedia articles (including the article images and facts) can be freely used under Attribution-ShareAlike license, unless stated otherwise. Cite this article:
Time dilation Facts for Kids. Kiddle Encyclopedia.