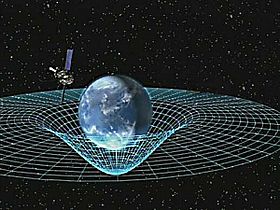 An illustration of the space-time curvature caused by Earth.

Space-time is a mathematical model that joins space and time into a single idea called a continuum. This four-dimensional continuum is known as Minkowski space.

Combining these two ideas helped cosmology to understand how the universe works on the big level (e.g. galaxies) and small level (e.g. atoms).

In non-relativistic classical mechanics, the use of Euclidean space instead of space-time is good, because time is treated as universal with a constant rate of passage which is independent of the state of motion of an observer.

But in a relativistic universe, time cannot be separated from the three dimensions of space. This is because the observed rate at which time passes depends on an object's velocity relative to the observer. Also, the strength of any gravitational field slows the passage of time for an object as seen by an observer outside the field.

Wherever matter exists, it bends the geometry of spacetime. This results in a curved shape of space-time which can be understood as gravity. The white lines on the picture on the right represent the effect of mass on space-time.

In classical mechanics, the use of spacetime is optional, as time is independent of motion in the three dimensions of Euclidean space. However, when a body is moving at speeds close to the speed of light (relativistic speeds), time cannot be separated from the three dimensions of space. Time, from the point of view of a stationary observer, depends on how close to the speed of light the object is moving.

The 1926 thirteenth edition of the Encyclopedia Britannica included an article by Einstein titled "space-time".

Edgar Allan Poe wrote an essay on cosmology titled Eureka (1848) which said that "space and duration are one". This is the first known instance of suggesting space and time to be different perceptions of one thing. Poe arrived at this conclusion after approximately 90 pages of reasoning but employed no mathematics.

In 1895, H.G. Wells in his novel, The Time Machine, wrote, “There is no difference between Time and any of the three dimensions of Space except that our consciousness moves along it”. He added, “Scientific people…know very well that Time is only a kind of Space”.

All content from Kiddle encyclopedia articles (including the article images and facts) can be freely used under Attribution-ShareAlike license, unless stated otherwise. Cite this article:
Space-time Facts for Kids. Kiddle Encyclopedia.