Ashby-de-la-Zouch or Ashby de la Zouch is a market town and civil parish in the district of North West Leicestershire and the ceremonial county of Leicestershire, England. The town is near to the Derbyshire and Staffordshire borders. Its 2001 census population of 11,410 rose to 12,370 in 2011. Ashby de la Zouch Castle was important in the 15th–17th centuries. In the 19th century the town's main industries were ribbon manufacture, coal mining, and brickmaking. From 1849 it was served by the Leicester–Burton upon Trent line of the Midland Railway.

The civil parish includes the hamlets of Shellbrook to the west and Boundary to the north-west. Swadlincote, Burton upon Trent, Melbourne and Coalville are within 10 miles (16 km), with Derby 11 1⁄2 miles (19 km) due north. Ashby lies at the heart of The National Forest, about 24 miles (39 km) south of the Peak District National Park, on the A42 between Tamworth and Nottingham. In 2018, Ashby Market Street was named "Best Shopping Experience", and in 2019 it made the final of the rising-star category for UK high streets. 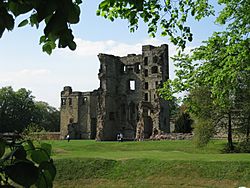 The town was known as Ashby in 1086. This is a word of Anglo-Danish origin, meaning "Ash-tree farm" or "Ash-tree settlement". The Norman French name extension dates from the years after the Norman conquest of England, when Ashby became a possession of the La Zouche family during the reign of Henry III.

Ashby-de-la-Zouch Castle was built in the 12th century. The town and castle came into the possession of the Hastings family in 1464 and William Hastings, 1st Baron Hastings enhanced its fortifications from 1473. In the English Civil War the town was one of the Cavaliers' chief garrisons under the control of Colonel Henry Hastings, 1st Baron Loughborough and commander of the North Midlands Army. When the town fell after a long siege in March 1646 it was counted a great relief to the surrounding towns and villages.

Many of the buildings in Market Street, the town's main thoroughfare, are timber framed, but most of this is hidden by later brick facades. The Bull's Head public house retains its original Elizabethan half-timbering although most of this was plastered over some years ago and can now no longer be seen from the street. A short distance further down Market Street is a shop, currently occupied as a LOROS Charity Shop, which does retain its original Elizabethan timbers in full street view. There are also Regency buildings in this street. Bath Street has a row of Classical-style houses called Rawdon Terrace dating from the time that the town was a spa in the 1820s.

The local upper school, Ashby School, previously Ashby Grammar School, is a mixed comprehensive school for 14- to 18-year-olds that was founded in 1567. There were formerly two other endowed boys' schools of 18th century foundation.

A local high school, Ivanhoe College, for 11 to 14-year-old children, is named after the historical novel Ivanhoe by Sir Walter Scott which was set in the area of the castle. In Scott's novel the town hosts an important archery competition held by Prince John, in which Robin Hood competes and wins.

Manor House School is an independent day school in the centre of Ashby for boys and girls aged four to 16. The school is located between St Helen's Church and the ruins of Ashby's historic castle. Pupils travel to the school from a wide geographical area. 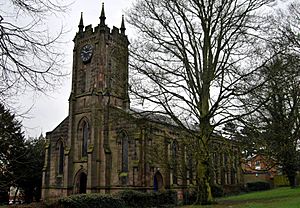 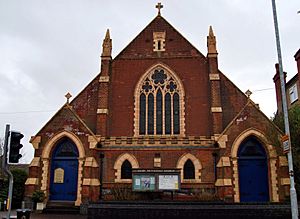 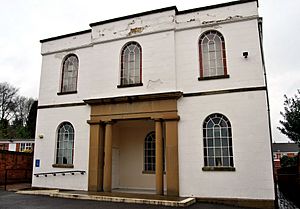 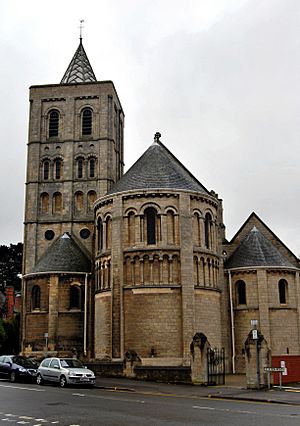 St Helen's Church is Ashby's original parish church. It is a late 15th century Perpendicular Gothic building but the outer aisles were designed by J. P. St. Aubyn and added in 1878. St. Helen's contains notable memorials to various members of the Hastings family and others, and a rare 300-year-old finger pillory which may have been used to punish people misbehaving in church.

Holy Trinity Church is a Gothic Revival building designed by H. I. Stevens in the Early English Gothic style and built in 1838–40. It has galleries supported by iron columns. The chancel was added in 1866 and the ironwork chancel screen in 1891.

The Roman Catholic Church of Our Lady of Lourdes was designed by F. A. Walters and built in 1908–15 at the expense of the 15th Duke of Norfolk. It is neo-Norman with three apses and a tower at the southeast corner.

The Congregational Church was built in 1825 in a neoclassical style with Tuscan columns.

The Methodist Church was built in 1867–68 in a Gothic Revival style. 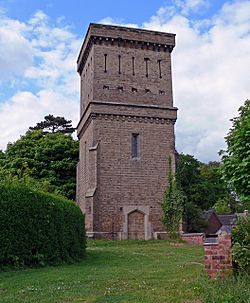 The Ivanhoe Baths was a Neo-Grecian building of 1822 with a Doric façade 200 feet (61 m) long. It was derelict by 1960 and was demolished in 1962. west of the town, in 1805. Here the Moira Baths were built, with a large hotel nearby. After a few years however, it was decided to convey the water to Ashby, where the Ivanhoe Baths were built. The Royal Hotel, originally called the Hastings Hotel, was built in 1826 to accommodate visitors to the growing spa. It has a Doric porte-cochère and further Doric columns in its hall inside.

The Grade II listed, 19th century water tower, located in the town's cemetery, on Moira Road, has been approved for conversion to a house, despite protests from English Heritage, Ashby Civic Society and local residents. The move has proved controversial as the water tower is a prominent landmark in the town, and a Grade II listed building. The renovation plan includes the construction of a 3-story stair tower and a two-storey glass conservatory; given the tower's prominence and historical interest, there are fears the additions may damage the tower's picturesque aesthetic and irrecoverably damage the historic building. English Heritage has raised concerns about the amount of alterations made to the tower and advised that the plans for the alterations and extensions should be "abandoned". Ashby Civic Society has attended every council meeting since proposals have been submitted, to protest the plans. The society says it is looking for a "suitable conversion that safeguards the integrity of the building", and condemns the current plans as "architectural vandalism of a landmark Grade II-listed building". "We are appalled that the objection of English Heritage, guardians of listed buildings, can be so easily brushed aside."

Willesley Park Golf Course is set in rolling countryside, partly in parkland and partly on heathland. The course was opened for play in April 1921. The first hole is played along an avenue of lime trees which once flanked the old coach road from the old Norman castle in the town to the now demolished Willesley Hall.

Ashby Hastings Cricket Club was founded before 1831. Its ground, the Bath Grounds in the centre of Ashby, hosts Leicestershire CCC 2nd XI matches each year. The club runs three Saturday League sides, all of which play in the Everard's Leicestershire County Cricket League. The 1st XI play in the Premier Division, the highest level of club cricket available in Leicestershire, the 2nd XI play in Division 4 and the 3rd XI play in Division 8. The club also run a Midweek XI who play in the Premier Division of the Loughborough Cricket Association League and a Sunday XI who play friendly cricket. The club's Junior Section includes sides at Under 15, Under 13, Under 11 and Under 10 age groups. A second club, Ashby Town Cricket Club was formed in 1945.

Ashby RFC has its grounds in Nottingham Road. It plays in the League Midland 3 East (North). It also has mini and junior sections for girls and boys from age four, as well as seniors and seconds side and an O2 Touch team for players of all ages and both genders.

The town was to be served by Ashby Canal from 1804 but the canal never reached Ashby, only reaching the town of Moira. There was a station on the Leicester to Burton upon Trent Line of the Midland Railway from 1845. The canal was abandoned in stages between 1944 and 1966 and British Railways withdrew the passenger service and closed Ashby de la Zouch railway station in September 1964. The railway remains open for freight.

In the 1990s BR planned to restore passenger services between Leicester and Burton as the second phase of its Ivanhoe Line project. However, after the privatisation of British Rail in 1995 this phase of the project was discontinued. In 2009 the Association of Train Operating Companies published a £49 million proposal to restore passenger services to the line that would include reopening a station at Ashby. The restoration of passenger train services remains part of Leicestershire County Council's Structure Plan as a project awaiting funding. 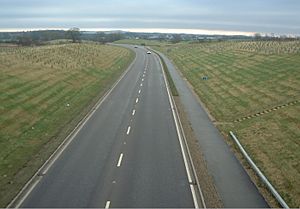 The A50 Leicester to Stoke-on-Trent road and the A453 Birmingham to Nottingham road used to pass through the town centre. The heavy traffic which previously travelled through the town has been substantially relieved by the A42 and A511 bypasses, which replaced the A453 and A50 respectively.

East Midlands Airport is 9 miles (14 km) northeast of Ashby and provides flights to and from other parts of the UK and Europe.

Every May, Ashby holds an arts festival currently sponsored by the district council. This features local artists, musicians, song writers, poets, performers and story tellers. The multiple sites around the town host exhibitions, musical performances, workshops and talks, and the town centre is decorated with flags and an outdoor gallery.

Ashby Statutes, a travelling funfair, is held every September. Instituted by Royal Statute, it was originally a hiring fair when domestic servants and farmworkers would be hired for the year. Market Street, the main road through the town (the former A50 trunk road), is closed for nearly a week and the traffic is diverted along the narrower roads either side of Market Street called North Street and South Street. Locals call this event 'The Statutes'.

A song called "Ashby de la Zouch (Castle Abbey)", written by Al Hoffman, Milton Drake and Jerry Livingston, was recorded by the Merry Macs in 1946 on Decca No. 18811. It includes the lines "If you wanna smooch and be happy as a pooch, go to Ashby de la Zouch by the sea." (Ashby-de-la-Zouch is close to the centre of England, almost as far from the sea as is possible.) In April 1946 the American jazz bassist and composer Charles Mingus recorded a tune called "Ashby de la Zouch" with his band. The title or choice of song could have been an acknowledgement of guitarist Irving Ashby who took part in the recording.

The local upper school, Ashby School, previously Ashby Grammar School, is a mixed comprehensive school for 14–18-year-olds. It was founded in 1567. The town formerly had two other endowed boys' schools founded in the 18th century.

A local high school, Ivanhoe College, for 11 to 14-year-olds, is named after the historical novel Ivanhoe by Sir Walter Scott, which he set in the area of the castle. In Scott's novel the town hosts an important archery competition held by Prince John, in which Robin Hood competes and wins.

Manor House School was an independent day school in the centre of Ashby for boys and girls aged four to 16. The school was located between St Helen's Church and the ruins of Ashby's historic castle. Pupils travelled to the school from a wide area. The school entered into administration on 13 December 2018.

All content from Kiddle encyclopedia articles (including the article images and facts) can be freely used under Attribution-ShareAlike license, unless stated otherwise. Cite this article:
Ashby-de-la-Zouch Facts for Kids. Kiddle Encyclopedia.