Moira is a former mining village about 2.5 miles (4 km) southwest of Ashby-de-la-Zouch in North West Leicestershire, England. The village is about 3 miles (5 km) south of Swadlincote and is close to the boundary with Derbyshire. The population is included in the civil parish of Ashby Woulds.

For centuries North West Leicestershire has been quarried and mined for coal, limestone, granite and brick clay, and its environmental damage was one of the reasons that it was chosen in the 1990s as the site for the National Forest, which is part of a Government-funded programme to create more woodland. Proximate villages include Donisthorpe, Overseal, Oakthorpe and Spring Cottage.

Moira's toponym is derived from the Irish earldom of Moira, one of the titles of the Hastings family, which held Ashby de la Zouch Castle. The former local colliery, Rawdon Colliery, also bore a Hastings family name.

The Midland Railway opened its Leicester to Burton upon Trent Line through Moira in 1845. Moira station served the village until British Railways closed it in 1964. The building survives and the line remains open as a freight route.

Rawdon Colliery was worked for about 150 years. Its seams extended 6 miles (10 km) from the shaft,and some had been worked twice, recovering lower grade coal. The pit survived Britain's pit closure programme in the mid-1980s that followed the miners' strike, but ran out of viable coal seams. Gases were rarely a hazard, but spontaneous combustion of coal dust was a potential problem. 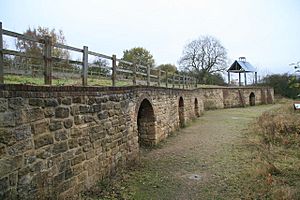 Moira Furnace is a restored 19th century blast furnace. A 1.5-mile (2.4 km) section of the Ashby Canal adjacent to the furnace has also been restored and rewatered, although it lacks a navigable link to the rest of the system due to the A42 road having been built across its line. The furnace site also has craft workshops and a small nature reserve.

There is a Co-Operative supermarket on Shortheath Road, which was given a new frontage in 2016.

All content from Kiddle encyclopedia articles (including the article images and facts) can be freely used under Attribution-ShareAlike license, unless stated otherwise. Cite this article:
Moira, Leicestershire Facts for Kids. Kiddle Encyclopedia.