Calke Abbey is a Grade I listed country house near Ticknall, Derbyshire, England, in the care of the charitable National Trust.

The site was an Augustinian priory from the 12th century until its dissolution by Henry VIII. The present building, named Calke Abbey in 1808, was never actually an abbey, but is a Baroque mansion built between 1701 and 1704.

The house was owned by the Harpur family for nearly 300 years until it was passed to the Trust in 1985 in lieu of death duties. Today, the house is open to the public and many of its rooms are deliberately displayed in the state of decline in which the house was handed to the Trust. 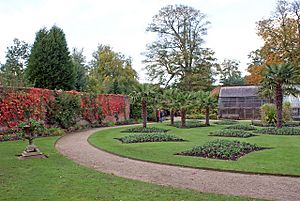 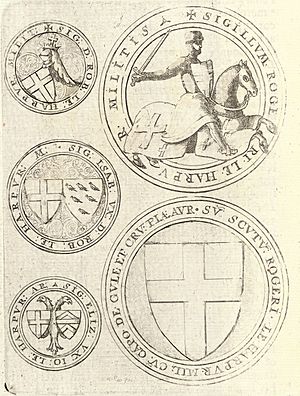 Seals of the Le Harpur family by Wenceslas Hollar

Calke Priory was founded by Richard d'Avranches, 2nd Earl of Chester some time between 1115 and 1120 and was dedicated to St Giles; d'Avranches had inherited from his father vast estates in both England and Normandy, of which Calke and many of the surrounding villages were part. The Priory was initially an independent community, but after the death of Ranulf de Gernon, 4th Earl of Chester in 1153, it (along with most of his Derbyshire estates) became part of the dowry of his widow, Maud of Gloucester. Maud initially granted nearby St. Wystan's Church, Repton to the canons at Calke Priory, but subsequently had a new priory, dedicated to the Holy Trinity, built at Repton. In 1172 she moved the Canons from Calke to the new Repton Priory, with Calke then becoming a subordinate "cell" to Repton Priory.

Nothing is known of the priory during the 14th and 15th centuries; however, historian Oliver Garnett suggests the priory may have served more as the centre of an agricultural estate than as a religious establishment during this time.

Repton Priory was dissolved in 1538, and its land confiscated by The Crown. The canons had, however, anticipated the dissolution and so had begun to lease out some of their estates: Calke was one of these, leased on 29 August 1537 to John Prest (or Priest) for 99 years.

John Prest (or Priest) was granted the lease to Calke Priory for 99 years, having prepaid for the first 59. He was a member of the London Grocers' Company and lived at Calke until his death in 1546. The house then passed to his widow, then through his daughter Frances to her husband William Bradborne. The lease was granted by the Crown to John Dudley, Earl of Warwick (later Duke of Northumberland), after which the estate passed through various freehold and leasehold owners before eventually being acquired by Richard Wendsley in 1575. Wendsley had twice been MP for Derbyshire and is known to have constructed a new house on the estate which he resided in; this is the Elizabethan House which forms the core of the house that still exists today, and of which parts are still visible within the house's courtyard. Little was known about how this Elizabethan House looked until repair work on the current house was undertaken by the National Trust in 1988. The house was built around a courtyard with the South range serving as the entrance front, with a gatehouse; two projections in the foundations at the North-East and North-West reveal the locations of 2 stair-turrets. The work also revealed a later 17th-century arcaded loggia which were built next to both the stair-turrets. The east and west ranges of this house were not parallel; something that has distinctly affected the shape and layout of the current house. This discrepancy could either reflect the different phases of construction within the Elizabethan house or the layout and alignment of the walls of the original priory buildings.

In 1585, Wendsley sold the estate to three-time MP for Derby, Robert Bainbridge. He was an "extreme protestant" who was imprisoned in 1586 in the Beauchamp Tower of The Tower of London (where he engraved his name which can still be seen today) for refusing to accept Elizabeth I's Church Settlement. Historian Oliver Garnett suggests that Bainbridge may have chosen to live at Calke as the parish was not under the control of a bishop: meaning he could worship as a Puritan without interference. Following Robert's death, Calke passed to his son, another Robert. This Robert sold the estate in 1622 to Sir Henry Harpur, for £5,350 (approximately £513,600 in modern terms).

In 1622 the estate was bought by Sir Henry Harpur, 1st baronet (c. 1579–1639). The Harpur family had become established in the middle of the previous century; descendants of Richard Harpur who was a successful lawyer who had risen to become a judge at the Court of Common Pleas at Westminster and then Chief Justice of the County Palatine of Lancaster. He and his descendants acquired, through wealth and marriage, estates in Staffordshire (centred on Alstonfield) and Derbyshire (centred on Swarkestone).

The house was rebuilt by Sir John Harpur, 4th baronet (1680–1741) between 1701 and 1704. The house and estate were owned by successive Harpur baronets and were ultimately inherited by Sir Vauncey Harpur Crewe (1846–1924), 10th (and last) baronet who was devoted to his collection of natural history specimens. When he died, his eldest daughter, Hilda Harpur Crewe (1877–1949) sold some of his collection of birds, butterflies and fishes to pay death duties. She was succeeded by her nephew, Charles Jenney (1917–81), who was the eldest son of Frances Harpur Crewe, the fourth daughter of Sir Vauncey. Charles changed his name to Charles Harpur-Crewe. His sudden death led to crippling death duties (£8m of an estate worth £14m) and in 1985 the estate was transferred to the National Trust by his younger brother Henry Harpur-Crewe (1921–91). 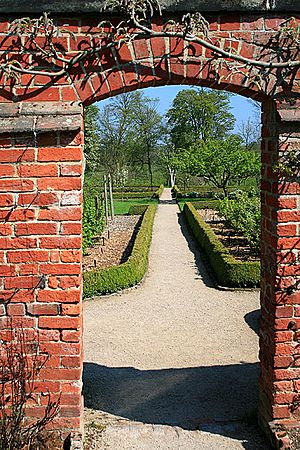 Down the Garden Path

Set in the midst of a landscape park, Calke Abbey is presented by the National Trust as an illustration of the English country house in decline. A massive amount of remedial work but no restoration has been done and interiors are almost as they were found in 1985, so the decay of the building and its interiors has been halted but not reversed. Before the National Trust's work of the late 1980s everything had remained untouched since the 1880s.

To the side of the house is a large quadrangle of buildings forming the old stable yard and farm, complete with old carriages and farm implements. The outbuildings incorporate a brewhouse that is linked to the main house by a tunnel.

The Trust manages the surrounding landscape park with an eye to nature conservation. It contains such features as a walled garden, with a flower garden and a former physic garden, now managed as a kitchen garden. The ancient deer park of the Calke Abbey Estate is a designated Site of Special Scientific Interest and national nature reserve, particularly noted for its rare wood pasture habitat and associated deadwood invertebrate fauna. The estate is also listed at Grade II* on the National Register of Historic Parks and Gardens.

A substantial programme of events is arranged from February to October.

Some years after Calke was handed over to the National Trust to settle death duties, an heir was discovered: Andrew Johnson, a distant cousin of the Harpur family. Johnson was a wealthy resident of Vermont and the owner of important stands of timber and of a lumber business, though the Daily Mirror in Britain referred to him as a "lumberjack". Johnson was given the use of an apartment in the Abbey, which he and his family have used on occasional visits.

The limestone quarries on the estate near Ticknall are the end point of the railway that took limestone to the Ashby Canal at Willesley basin and one of the tunnels can be seen restored and running under the drive. It closed in 1915.

All content from Kiddle encyclopedia articles (including the article images and facts) can be freely used under Attribution-ShareAlike license, unless stated otherwise. Cite this article:
Calke Abbey Facts for Kids. Kiddle Encyclopedia.