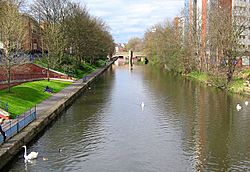 A canalised section of the river in Leicester

The River Soar is a major tributary of the River Trent in the English East Midlands and is the principal river of Leicestershire. The source of the river is midway between Hinckley and Lutterworth. The river then flows north through Leicester, where it is joined by the Grand Union Canal. Continuing on through the Leicestershire Soar Valley, it passes Loughborough and Kegworth until it reaches the Trent at the county boundary. In the 18th century, the Soar was made navigable, initially between Loughborough and the Trent, and then through to Leicester. It was not until the early 19th century that it was linked by the Grand Union Canal to the wider network to the south and to London.

According to a suggestion due to William Somner (1701) the Soar river may formerly have been called the Leir, from Brittonic *Ligera or *Ligora, cognate with the French Loire. This theory is based on the name of Leicester (as well as Loughborough and the village of Leire) being derived from the name of the river. 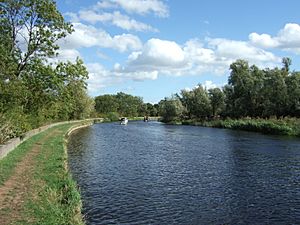 The River Soar near Sutton Bonington, where it forms the Nottinghamshire (to the left) — Leicestershire county border.

The Soar rises near Wibtoft in Warwickshire, and flows north to join the Soar Brook near Sharnford, it then continues in a north-easterly direction, passing through Croft and between Narborough and Littlethorpe, until on the outskirts of Leicester it is joined by the Sence near Enderby. Before flowing through the centre of the city it meets the Grand Union Canal at Aylestone, where it is also joined by the River Biam. After passing over Freemens Weir, the river splits and recombines with the canal, creating an area of Leicester called Bede Island. The navigable arm that runs to the east has been canalised with parallel banks and is known as ‘The Mile Straight’. Beyond Blackfriars, the river splits again to form Frog Island and Abbey Park, it recombines at Belgrave where it passes beside the National Space Centre.

Once out of the city the Soar passes Birstall and threads its way through the lakes of Watermead Country Park, until it reaches Wanlip. The river then meets the once navigable River Wreake, near Cossington Mill, with another tributary the Rothley Brook, joining the river just downstream. The Soar continues north-east to reach Mountsorrel then passes between Quorn and Barrow-on-Soar, at which point an arm of the canal extends into Loughborough, although the river passes to the East of the town at Cotes. Downstream of Stanford on Soar the river forms the county boundary between Nottinghamshire and Leicestershire. Between Stanford and Normanton on Soar, the canal rejoins the river, which then continues to Zouch, passing the ‘Devils Elbow’ to reach Kegworth. Downstream of Kegworth, it meets the Kingston Brook, near the village of the same name, passing Ratcliffe-on-Soar and its power station, before flowing into the Trent at Trent Lock. 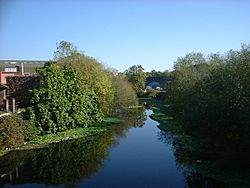 The River Soar is rich in wildlife with thriving bird, fish and plant populations being popular with wildlife enthusiasts. The river was once notorious for its unusual pink colour - a result of discharges from Leicester's prosperous textile industries. However the end to textile industries near the river in Leicester and clean-up work by the Environment Agency has now restored it to its natural state.

Industry now wanting to attempt to discharge any sewage waste into the river must now obtain an agreement from the Environment Agency. Several consents have been granted to companies to use the River Soar, however the quantity and quality of the sewage is strictly controlled to a preset amount that is agreed on with the Environment Agency.

The quality of any water is determined by what is able to contaminate the river upstream, the River Soar is constantly monitored by the Environment Agency which keeps check on the level of pollution. The pollution in the water running through the Soar in the city of Leicester is low and the water is generally of good quality; however there is a significant decrease in the quality just downstream of the city, where the Wanlip sewage treatment works enters the river.

Unfortunately though new tourism industry has caused environmental problems; Barge hulls and propellers may cause “physical damage and uprooting” of plants and turbulence may increase water turbidity to the extent that light may not reach underwater plants, reducing photosynthesis. Sewage works have an adverse effect on water life. 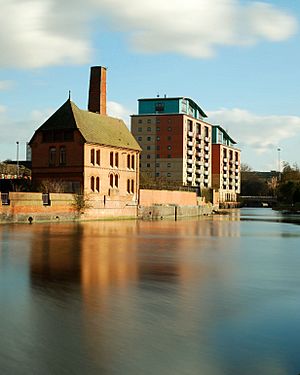 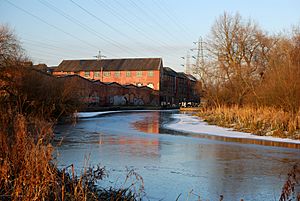 A factory on the River Soar south of Leicester

The River Soar before the late 1700 was too small and shallow to allow navigation of barges; however this was partially solved by the construction of the Leicester canal which allowed the Soar to be navigable for almost about 40 miles (64 km).

The expansion of the canal meant that industry could start to develop along the canal side, with the transport provided by the canal being “vital to the industry.” This included buildings and industries like “wind and watermills; brewing and malting; bridges; canal and railway structures; public utilities.”

“By 1895, there were 231 listed hosiery manufacturers in the county. In Leicester, the industry employed 10% of the population in 1851, and around 7% in 1881 and 1911.” This shows the importance of hosiery to Leicester’s economy. This industry needed a consistent supply of water and needed transport links, so was located alongside the canal. Due to the excellent transport links provided by the Grand Union Canal, the Hosiery industry was able to expand rapidly.

Many of these factories however soon outgrew themselves, moving to new larger sites, which vacated space for other trades such as boot and shoe manufacture, printing or box making.

Railway competition in the nineteenth century reduced canal profits. This was the beginning of the end for many of the companies who owned the canals; several of these companies converted their canals to railways while many of the others were bought out by railway companies looking to expand their businesses.

With the decline of industry in the 1960s, the warehouses and factories which were once the core of Leicester’s economy had fallen into dereliction. Leicester City Council has made a move towards re-developing the waterfront "offering one of the most exciting waterside regeneration opportunities in the country." The company is currently building luxury waterside apartments. This will enhance the areas aesthetic values. Research conducted by Newcastle University suggests that people’s desire to reside on the waterfront and enjoy recreation offered by the canal is upset by "visually unattractive features, such as run-down derelict areas and poor design".

The re-development plan has included the building of the Walkers stadium, home to Leicester City F.C., along the canal in 2002, "from a barren, desolate piece of waste-ground has risen a stunning futuristic collaboration of steel and glass that dominates the skyline of Leicester." Old warehouses have also been converted into student accommodation for De Montfort University increasing the value of the area.

On the eastern bank of the Soar in central Leicester are the premises of Donisthorpe and Company, a producer of textiles. The Donisthorpe Mill, also known as Friars' Mill, is one of the oldest mills in the East Midlands, and manufacturing activity has occurred on its site since the 1730s. The Mill was awarded listed status in 1975. A number of surrounding buildings, including a Victorian pump house, were also listed at this time. The Donisthorpe Company left the factory in 1983, which led to immediate concerns about the mill's conservation. The building stood empty for a number of years, and fell into a state of disrepair. In July 2012, a fire destroyed its roof, clocktower and most of the interior. In November 2012, Leicester City Council announced its decision to purchase and restore the Donisthorpe Mill building.

Geoffrey of Monmouth, who claimed Leicester was named for an eponymous King Leir, claimed that the king was buried in an underground chamber beneath the river near Leicester. This was supposedly devoted to the god Janus.

Leir, Lerion, and Ligora(ceastre) all derive from the old Brittonic name of the River Soar, *Ligera or *Ligora.

The body of King Richard III was sometimes said to have been thrown into the river during the Dissolution of the Monasteries under Henry VIII. From this legend, the bridge carrying the A47 across the Soar at Leicester is known as "King Richard's Bridge". However, in 2013, it was confirmed that the skeleton discovered beneath a car park in 2012 was, in fact, that of Richard III and, in March 2015, the skeleton was re-interred in Leicester Cathedral. 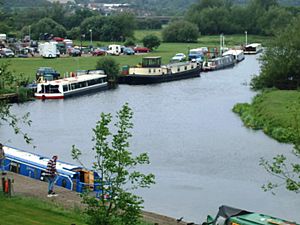 Soar valley between Barrow upon Soar and Mountsorrel

The Soar is now a hive of tourism rather than of industry. Holiday narrowboat cruises are extremely popular as it is a relaxing way to visit the country and get ‘in-touch’ with nature. The tow-paths next to the canal are used for “cycling, rambling, horse-riding and picnicking” (Leicester City Council, 2005).

The waterway is a popular location for match and occasional fishing. There are large carp, chub, bream, roach, and perch in the canal, plus dace and barbel on some stretches (www.waterscape.com/River_Soar).

The stretch of the River Soar which passes through the centre of Leicester known as the 'Mile Straight' is home to De Montfort University Rowing Club, the University of Leicester Boat Club and Leicester Rowing Club a rowing and sculling club formed in 1882.

All content from Kiddle encyclopedia articles (including the article images and facts) can be freely used under Attribution-ShareAlike license, unless stated otherwise. Cite this article:
River Soar Facts for Kids. Kiddle Encyclopedia.