Enderby is a village and civil parish in Leicestershire, on the southwest outskirts of the city of Leicester. The parish includes the neighbourhood of St John's, which is east of the village separated from it by the M1 motorway. The 2011 Census recorded the parish's population as 6,314.

The parish is bounded by the City of Leicester and the civil parishes of Braunstone Town, Glen Parva, Lubbesthorpe, Narborough and Whetstone.

The course of the Fosse Way Roman road passes through the parish. Near St John's is the deserted village of Aldeby by the River Soar.

A disused railway line known locally as ‘Whistle Way’ is north of the village, and has since become the western edge of the Enderby and Narborough areas.

Rail transport is provided by nearby Narborough railway station on the Birmingham to Peterborough Line. Trains are operated by CrossCountry and provide regular services to Leicester, Hinckley, Nuneaton and Birmingham.

Arriva Midlands operate services 50, X55 and X84 from Leicester into the village.

Enderby Park and Ride is situated on the corner of B4114 St John's and Leicester Lane, opposite Leicestershire Constabulary Headquarters and Palmers Garden Centre, and was opened on 16 November 2009. It has parking for 1,000 cars. Buses run every 15 minutes into Leicester city centre from 7am to 7pm, Mondays to Saturdays. Stops include Smith Way (Grove Park), Aylestone Road (Leicester Royal Infirmary), Oxford Street (De Montfort University) and St. Nicholas Circle (stand FD). 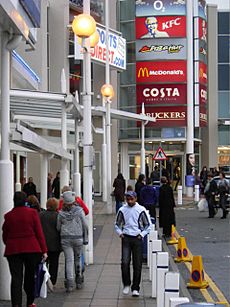 Enderby is home to Fosse Shopping Park, one of Britain's biggest out-of-town shopping parks. The village centre has a newsagents, petrol station, florists, beauty salon, delicatessen, library, cafe, bookmakers, and hand car wash. It has two "Co-operative Food" stores within metres of each other, one owned by Central England Co-operative and another by The Co-operative Group.

Enderby has a leisure centre with swimming pool, gym, squash courts and sports hall for badminton and 5-a-side football. There is also a nine-hole pay-and-play golf course. The Nags Head pub in Enderby is a popular attraction and a known watering hole of ex-forces.

The head office of clothing retailer Next plc is located in Enderby.

Enderby is twinned with Le Haillan, a suburb of Bordeaux, France.

Enderby Town Football Club was founded in 1900. It played in the local Leicestershire Senior League until 1969, and joined the Southern League in 1972. It changed its name to Leicester United F.C. in 1983 and was dissolved in 1996. 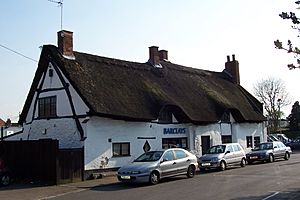 4–6 Broad Street, a 16th-century thatched cruck cottage that for a period served as a branch of Barclays Bank

The schools that Enderby children usually attend are:

All content from Kiddle encyclopedia articles (including the article images and facts) can be freely used under Attribution-ShareAlike license, unless stated otherwise. Cite this article:
Enderby, Leicestershire Facts for Kids. Kiddle Encyclopedia.