Kids Encyclopedia Facts
Not to be confused with Braunstone Park & Rowley Fields. 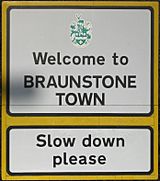 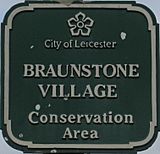 Braunstone is a civil parish and is the largest parish within the district of Blaby in Leicestershire, England, now known as the Town of Braunstone or more commonly, Braunstone Town. In 2007 the population was around 15,000. There are around 7,500 households including Thorpe Astley. At the 2011 census the population of the civil parish had increased to 16,850.

Braunstone is mentioned in the Domesday Book of 1086, giving a population of "two sokemen and four villeins". The village remained a small settlement (population 238 in 1921) until 1925 when the Leicester Corporation compulsorily purchased the bulk of the Winstanley Braunstone Hall estate.

Braunstone Town is adjacent to the M1 motorway (junction 21) and is adjoined by the Meridian Business and Leisure Parks, and the Fosse Shopping Park and Grove Triangle retail outlets.

Although the parish doesn't have a railway station of its own, Leicester station is close. Leicester PlusBus, is a scheme where train and bus tickets can be bought together at a saving. 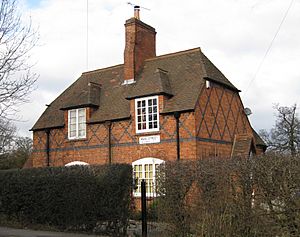 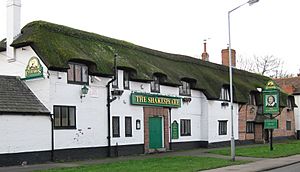 Next came the building of the Roman road from Leicester, through the site of the Narborough Road South to the High Cross near Sharnford. It is also evident that the Vikings of the early or later period had settlements in or near Braunstone, hence the nearby names of Viking origin – Lubbesthorpe, Countesthorpe, Enderby, Elmesthorpe, Cosby, Kilby, Kirby etc. Throughout the above period Braunstone was covered with forest as were most county areas surrounding – in what was known as Leicester Forest. But like most forests these were composed of a series of large woods containing small early settlements or hamlets inter-connected by rough trackways – from which most of our public field paths owe their origin.

"Braunstone – six plough lands, all but for oxgangs, in Braunstone which is the reign of The Confessor had been valued at twenty shillings, were worth sixty shillings at the general survey and were then held by the son of Robert Burdet. The land was equal to four ploughs, one was in Demesne, and four Bondmen; and two socmen and five villains, with one border, had two ploughs. There was a wood five furlongs long and three broad, and there were 5 acres (20,000 m2) of meadow. Two socmen abiding in Braunstone had five oxgangs of land in Lubbesthorpe; and jointly with ten villains and six borders in that lordship had two ploughs and five ploughing oxen.

The above lands were held by Robert Burdet under Hugh de Grandmesnil, one of William I’s most powerful barons. Notes: A ploughland or carvcate = about 80 to 120 acres (0.49 km2) of land. Socmen = Scandinavian Villan = Peasant or serf.

NOTE: A copy of the Domesday Book is displayed at the Civic Centre.

The first Lord of the Manor was de Grandmesnil. At this time the village consisted of 8 households and was worth about 60 shillings.

The Harcourt or Horecut family held the over-riding interest in the estate from the 13th to the 16th Century. A survey taken in 1299 showed a growth to 24 households in the village.

The fourteenth century saw several outbreaks of the Black Death in the area. Its effect on Braunstone is not recorded, but nearby Glenfield was seriously affected. At this time the Leicester Forest extended into Braunstone as far as Bendbow Spinney.

Woodlands were gradually converted to pastures, mainly for sheep – being then the more profitable husbandry. Leicester Forest was fully enclosed in 1628. Villagers of Braunstone were compensated for the loss of Forestry Rights.

The 18th Century was a period of prosperity for Braunstone. The largest estate of the time was owned by Abraham Compton and comprised 68 ewes, 25 lambs, 14 cows, 6 heifers, 4 calves and 6 pigs.

In 1750 James Winstanley III tried to sink a pit on the manor. His attempts were thwarted when his bore hole was filled with stones by intruders, thought to be from local mining districts. 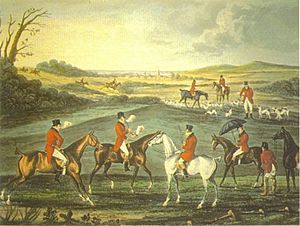 In the 1820s Braunstone was known as a place to go fox-hunting. Charles Loraine Smith painted a set of parodies known as the "Smoking Hunt" which pokes fun at the fashionable sport of hunting here.

Braunstone remained a picturesque village with various tenanted farmsteads until, in 1925, the Leicester Corporation compulsorily purchased the bulk of the Winstanley Braunstone Hall estate for £116,500.

In 1935 the part of Braunstone on the city side of Braunstone Lane became the North Braunstone Ward of the City of Leicester, and the parish of Braunstone in compensation had part of Lubbesthorpe added to its boundary. It mostly consists of council housing built between 1925 and 1940.

During World War Two Braunstone Park was put to agricultural use. Wheat, barley, and potatoes were grown, and sheep allowed to graze. What is now the Memorial Gardens was used as a military camp, occupied first by the British Army and later by the American 82nd Airborne troops. After the war, due to the severe housing shortage, people were allowed to occupy the camp until they found homes of their own.

By the 1990s, however, Braunstone was perhaps the most troubled part of Leicester, with crime rates and unemployment among the highest in the city. In April 1994, The Independent newspaper reported that unemployment on the estate was above 25% and was blighted by youth gangs engaging in anti-social behaviour.

The Town Council has 21 elected members (i.e. councillors) who are elected for terms of office of four years. 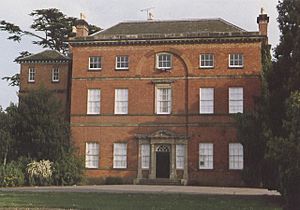 Braunstone Hall is a Grade II listed building in the centre of Braunstone Park. It was built in 1776 for the Winstanley family, lords of the manor and the main land owners in the village of Braunstone. In many ways the Hall resembles town houses like 17 Friar Lane. It is built in similar materials and has similar Classical proportions and decoration. But, while the Friar Lane houses were lived in by wealthy merchants and professional people or were used as town houses by landed families, Braunstone Hall was the centre of a country estate passed on through the Winstanley family from generation to generation. As country houses go, Braunstone hall is fairly unassuming. It was not designed by one of the many fashionable country house architects of the day but by local builder and Leicester politician, William Oldham. He used red brick and Swithland slate, common local materials. The central doorway and windows are emphasised just as they are at 17 Friar Lane. Here they are set in an arched recess reaching up to the top of the facade. The Hall has a slightly less elaborate frontage to the Park at the back and, inside, Classical columns in the entrance hall and an elegant staircase. Building has always been a dangerous occupation and the building records show that a stonemason and a labourer were killed in the construction of Braunstone Hall. Around the Hall, the Winstanleys had a Park laid out with a lake and gardens. As a wealthy family they had horses and carriages which were kept in the stable block next to the house. These buildings did not share the refinement of the house and were more like farm buildings, but they were still carefully designed, with fine brickwork arches and decoration at the eaves. The walled garden, restored and beautifully planted by the city council, once contained fruit trees, serving the household both as a source of food and as a place to stroll. There are also reminders of the Winstanleys in the village. They commissioned one of the most famous of Victorian Architects, William Butterfield, to design cottages for estate workers at Cressida Place and in Main Street. Both groups of cottages were built in 1859. Butterfield modelled the houses on traditional buildings and used local materials but their design has a deliberate, thought-out quality which suggests that it was the work of an architect. The parsonage, built in 1864, and the village school of 1867, were paid for by the Winstanleys. In 1902 parts of the estate adjacent to Narborough Road were offered for sale as building plots. Braunstone was greatly changed in the 1930s when the Winstanleys estate was bought by the Leicester Corporation, partly as land for new housing. Initially held by the Parks Department with the Hall being used as a junior school with over 600 places from 1932, the Hall and two acres of surrounding land were purchased by the Leicester Education Committee in 1939 for £3,500, allowing the construction of an assembly hall and further alterations to the building. The Hall was used as a school until 1996, after which it fell into disrepair. In 2013 plans were unveiled for the restoration of the building and its conversion into a hotel, restaurant, wedding venue and conference centre. The hall is now being turned into a wedding venue. Weddings can be taken place there and guests will be able to stay there,after it has all been re-furbished. 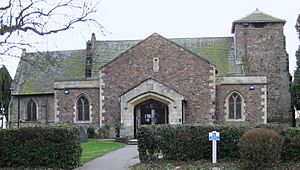 The first record of a church is 1168: the earliest parts of the existing church date from the twelfth or thirteenth century. It is built of limestone and consists of a short square tower, nave and chancel. It was re-roofed in 1867 and had some minor refurbishment in the 20th century. In 1937 Braunstone became a parish in its own right, and St Peter's became the parish church with its own vicar.

All content from Kiddle encyclopedia articles (including the article images and facts) can be freely used under Attribution-ShareAlike license, unless stated otherwise. Cite this article:
Braunstone Town Facts for Kids. Kiddle Encyclopedia.