The Charnwood Forest Canal, sometimes known as the "Forest Line of the Leicester Navigation", was opened between Thringstone and Nanpantan, with a further connection to Barrow Hill, near Worthington, in 1794

It marks the beginning of a period of history that saw the introduction of railways to supplement canals and, in the end, superseding them, leading eventually to the Midland Counties Railway. It was also one of the first uses of edge-rails for a wagonway.

(This should not be confused with the Charnwood Forest Railway.) 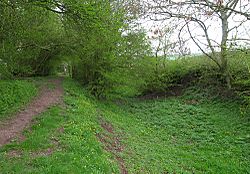 The now derelict and dried up Charnwood Forest Canal south of Osgathorpe. 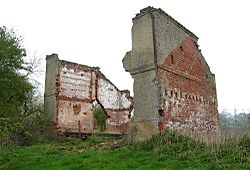 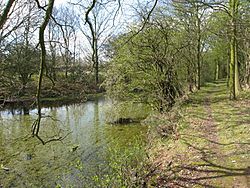 The now derelict Charnwood Forest Canal alongside the entrance to Longcliffe Golf Club in Nanpantan.

Until the end of the eighteenth century the City of Leicester had received its supplies of coal by packhorse from the Charnwood Forest coal mines around Swannington.

However, in 1778, the Loughborough Canal opened up the River Soar from the Trent to Loughborough, and the opening of the Erewash Canal the following year allowed a ready supply of coal from the Nottinghamshire coalfields into Leicestershire at reduced prices.

The considerable height difference between Nanpantan and Loughborough would have required a number of locks, for which there was not enough water, so the canal terminated at Nanpantan where goods had to be transhipped onto a horse-drawn wagonway which connected to Loughborough wharf. The tramway was engineered by William Jessop who used an iron edge-rail railway, in contrast to his partner Benjamin Outram, who, for other such lines, preferred the traditional iron "L" shaped flange-rail plateway.

Wagonways also linked the other terminus of the Forest Line at Thringstone to the coal mines and to the limestone quarries at Barrow Hill and Cloud Hill.

Considerable difficulties were encountered in constructing both the Soar Navigation and the Forest Line, and it was not until 1794 that they were both opened.

Use of the Forest Line was limited until the Blackbrook Reservoir feeder was finished. During the floods of 1799 this collapsed, destroying some earthworks and an aqueduct, and the canal went out of use for two years. Even after some repairs were carried out, further damage occurred and what little trade there had been did not return. Stevenson suggests "the problems ... stemmed partially from the hybrid nature of its construction." That is, it was part canal, part wagonway. However, note that Griffin has suggested that technical, financial and legal problems at the coal mines served by the canal caused the amount of coal to be carried to be reduced to uneconomic levels.

In 1808 the company sought to abandon the Forest Line but were advised that this would require a costly act of parliament, so they turned this down, and the unused canal became derelict. In 1830 the Leicester and Swannington Railway was authorised, which greatly affected the transport situation in the area. The canal company was dismayed to receive a formal request by the Earl of Stamford that the Forest Line be put into good order to carry limestone. A proposal was drawn up to convert the canal to a wagonway or railway throughout and a bill was presented to parliament but was opposed and was not passed. The company tried to sell off the land of the canal piecemeal but this was deemed to be illegal without an act of parliament. In the end a landowner who wanted to buy some of the land agreed to pay for a private bill and the Forest Line was officially abandoned in 1846.

After the canal's closure

It was not until 1832 that the opening of the Leicester and Swannington Railway allowed the Leicestershire miners to regain a competitive advantage. The Nottinghamshire coal miners responded to this by proposing a railway line extending from the Mansfield and Pinxton Railway, which had been opened in 1819. This eventually led to the building of Midland Counties Railway, which became a founding partner in the Midland Railway.

Subsequently the Charnwood Forest Railway (opened in 1883 and closed in 1963) took over part of the route of the Forest Line between Grace Dieu and Shepshed, including the aqueduct over the Blackbrook.

Remains of the canal can still be seen in places, particularly:

All content from Kiddle encyclopedia articles (including the article images and facts) can be freely used under Attribution-ShareAlike license, unless stated otherwise. Cite this article:
Charnwood Forest Canal Facts for Kids. Kiddle Encyclopedia.