Belgrave is an electoral ward and administrative division of the city of Leicester, England, consisting of the Leicester suburb of Belgrave in its entirety. 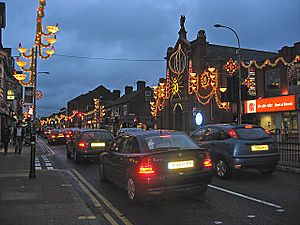 Diwali and Xmas lights in 2005

The old Belgrave Village is on the Loughborough Road, to the west of the A46, known at that point as 'Melton Road'.

Belgrave is bounded by the wards of Rushey Mead to the north, Latimer to the south, Charnwood to the east and Abbey to the west.

The settlement was named in the Domesday Book as Merdegrave (from Old English mearð 'marten' + grāf 'grove'). However, after the Norman Conquest the first part of the name merde was taken to be Old French 'dung', hence the people changed it to Old French beu, bel 'fair', 'lovely', in order to remove that unpleasant association.

One of the earliest mentions of this place is in the Domesday book where it is listed amongst the lands given to Hugh de Grandmesnil by the King. The land consisted of a mill, 24 acres (97,000 m2) of meadow and land for 6 ploughs.

The name was used for the large 19th-century terraced developments along the A46 (Belgrave Road and then Melton Road). This area now has a large, vibrant Asian community featuring the Golden Mile (Leicester): a stretch of road a mile long so called due to its particularly high concentration of shops selling gold. The Asian community based in and around Belgrave road have been residents since the early-1970s.

The Belgrave Hall area is a conservation area.

According to the 2001 UK Census, 104 Pacific Island-born people were residing in Belgrave, with many more being of Pacific Islander descent. This is the largest number for any location in the UK.

All content from Kiddle encyclopedia articles (including the article images and facts) can be freely used under Attribution-ShareAlike license, unless stated otherwise. Cite this article:
Belgrave, Leicester Facts for Kids. Kiddle Encyclopedia.