Melton Mowbray (/ˈmɛltən ˈmoʊbri/) is a town in Leicestershire, England, 19 miles (31 km) northeast of Leicester, and 20 miles (32 km) southeast of Nottingham. The town is on the River Eye and the River Wreake and has a population of 25,554.

The town is best known for its culinary speciality, the Melton Mowbray pork pie, and it is also one of the six homes of Stilton cheese. Melton Mowbray is promoted as the "Rural Capital of Food". 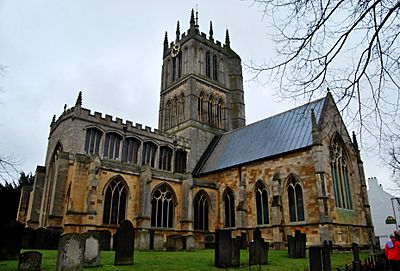 The name comes from the early English word Medeltone – meaning "Middletown surrounded by small hamlets" (and therefore has the same origin as Milton and Middleton). Mowbray is a Norman family name – the name of early Lords of the Manor – namely Robert de Mowbray.

In and around Melton, there are 28 scheduled ancient monuments, around 705 buildings listed as having special architectural or historical interest, 16 sites of special scientific interest, and several deserted village sites.

There is industrial archaeology including the Grantham Canal and the remains of the Melton Mowbray Navigation. Windmill sites, ironstone working and smelting archaeological evidence suggest that Melton borough was densely populated in Bronze and Iron Ages. Many small village communities existed and strategic points at Burrough Hill and Belvoir were fortified. There is also evidence to suggest that the site of Melton Mowbray in the Wreake Valley was inhabited before Roman occupation (43 AD).

In Roman times, due to the close proximity of the Fosse Way and other important Roman roads, military centres were set up at Leicester and Lincoln; and intermediate camps were also established, for example, Six Hills on the Fosse Way. Other Roman track ways in the locality passed north of Melton along the top of the vale of Belvoir scarp; they linked Market Harborough to Belvoir, and linked the Fosse Way to Oakham and Stamford.

Evidence of settlement throughout Anglo-Saxon and Danelaw period (8th/9th centuries) is reflected in many place names. Along the Wreake Valley, the Danish suffix "-by" is common, as is evident in Asfordby, Dalby, Frisby, Hoby, Rearsby and Gaddesby. In addition, a cemetery of 50–60 graves, of Pagan Anglo-Saxon origin, was found in Melton Mowbray. Although most villages and their churches, had origins before the Norman Conquest of 1066, stone crosses at Asfordby and Sproxton churches and Anglo-Saxon cemeteries as found at Goadby Marwood, Sysonby and Stapleford, are certainly pre-Conquest.

Melton Mowbray itself had six recorded crosses the construction of which spanned several centuries: (i) Kettleby Cross, (close to the present filling station near the junction of Dalby Road to the Leicester Road), (ii) Sheep Cross, on what was Spital End, (now Nottingham Street/Park Road Junction), (iii) Corn Cross at the Swine Lane/Spittle End junction, (reconstructed and reinstated on the Nottingham St/High St junction in 1996 as a memorial to the Royal Army Veterinary Corps), (iv) Butter Cross or High Cross, at the west end of Beast Market (again reconstructed from partial remains of the original Saxon cross in 1986/7 in the Market Place), (v) Sage Cross, at the East end of the Beast Market close to Saltgate, (on Sherrard Street opposite Sage Cross Street), and (vi) Thorpe Cross at the end of Saltgate (near the junction of Thorps Road and Saxby Road). All the original crosses were removed or destroyed during the reformation and other periods of iconoclasm or simply to make room for traffic or other development. 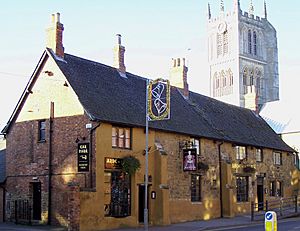 The effects of the Norman conquest are recorded in the 1086 Domesday Book. This document indicates that settlements at Long Clawson and Bottesford were of noteworthy size; and that Melton Mowbray was a thriving market town of some 200 inhabitants, with weekly markets, two water mills and two priests. The water mills, still in use up to the 18th century, are remembered by the present names of Beckmill Court and Mill Street.

Melton Mowbray has been a market town for over 1,000 years. Recorded as Leicestershire's only market in the 1086 Domesday Survey, it is the third oldest market in England. Tuesday has been market day ever since royal approval was given in 1324. The market was established with tolls before 1077.

Legacies from the Medieval period include consolidation of village and market town patterns; in Melton Mowbray, Bottesford, Wymondham, and Waltham-on-the-Wolds. The latter had a market in medieval times that continued until 1921, and an annual fair of horses and cattle. Many buildings in Melton Market Place, Nottingham Street, Church Lane, King Street and Sherrard Street have ancient foundations. Alterations to number 16 Church Street revealed a medieval circular stone wall subjected to considerable heat. This is probably the 'Manor Oven' mentioned in 13th century documents. Surveys of 5 King Street show it to be part of an early medieval open-halled house. It may be part of the castle or fortified Manor of the Mowbrays, which existed in the 14th century.

King Richard I and King John visited the town and may have stayed at an earlier castle. In 1549 following the Dissolution of the chantries, monasteries and religious guilds, church plate was sold and land purchased for the town. Resulting rents were used to maintain Melton School; first recorded in 1347 and one of the oldest educational establishments in Britain. Funds were also used to maintain roads, bridges and to repair the church clock.

During the English Civil War, Melton was a Roundhead garrison commanded by a Colonel Rossiter. Two battles were fought in the town: in November 1643, Royalists caught the garrison unaware and carried away prisoners and booty; in February 1645, Sir Marmaduke Langdale, commanding a Royalist force of 1,500 men, inflicted severe losses on the Roundheads. Around 300 men were said to have been killed. According to legend a hillside where the battle was thought to have been fought was ankle deep in blood, hence the name 'Ankle Hill'. However, this name is mentioned in documents pre-dating the Civil War. Furthermore, in the past, the names of Dalby Road and Ankle Hill have been switched around, thus confusing the true site of the battle.

Local notable families seem to have had divided loyalties, although the War ended with great rejoicings outside the "Limes" in Sherrard Street, home of Sir Henry Hudson. His father, Robert Hudson founded the "Maison Dieu" almshouses opposite the Church in 1640, which complement the stone built "Anne of Cleves House" opposite. This was built in 1384 and housed chantry priests until the Dissolution. It was then included in the estates of Anne of Cleves by Henry VIII, as a divorce settlement in the 16th century, although there is local debate about whether she ever stayed there or not. Anne of Cleves' house is now a public house which is owned by Everards Brewery, a Leicester-based brewery.

Between 1942 and 1964, RAF Melton Mowbray was situated to the south of the Town, towards Great Dalby. The Class A airfield was originally intended for aircraft maintenance but was taken over by RAF Transport Command.

Between 1946 and 1958 the site was used as a Displaced Persons camp by the Polish Resettlement Corps.

Melton Mowbray served as a Thor Strategic missile site between 1958 and 1963, when 254(SM) Squadron operated a flight of three missiles from the base.

Stilton cheese originated near Melton Mowbray, and is still made in the town today. Stilton cheese takes its name from the village of Stilton in Huntingdonshire, where it was marketed to travellers on the Great North Road, though no Stilton was ever made there.

The fox hunting crowd also left their mark on the town in a different way, through their "high jinks". Out celebrating a successful hunt in 1837, the 3rd Marquess of Waterford and his hunting party found several tins of red paint which they daubed liberally on to the buildings of the High Street, some traces of which can still be seen on doors of older buildings in the town.

There is also a picture labelled "A Spree at Melton Mowbray." and subtitled "or doing the Thing in a Sporting-like manner". It is dated 1837, the same date as the Marquess' event. It appears to take place on what is now called Leicester Street and depicts men in hunting clothes climbing on Swan Porch (a building in the market place), fighting and a gentleman apparently being robbed. There is no mention of any red paint. Of course this sort of thing may have been common in Melton Mowbray at that time and there is no evidence that the picture depicts the same events. What is certain is that the physical evidence appears to support the town was painted red. However this does not necessarily mean that the phrase "painting the town red" came from the event, and according to the Oxford English Dictionary, the phrase originated in the United States in the late nineteenth century.

The Melton Mowbray event was recorded as happening in the early hours of 6 April 1837. It was later recorded in the London Examiner. Henry Alken's pictures A Spree at Melton Mowbray and Larking at the Grantham Tollgate are said to illustrate the event. The events were depicted in a play called The Meltonians at The Theatre Royal, Drury Lane in 1838.

Melton Mowbray is home to Melton cloth (first mentioned in 1823), which is the familiar tight-woven woollen cloth which is heavily milled, and a nap raised so as to form a short, dense, non-lustrous pile. Sailors' pea coats are traditionally made of Melton cloth, the universal workmans' donkey jackets of Britain and Ireland and in North America, loggers' "cruising jackets" and Mackinaws.

Melton railway station is on the line from Birmingham to Stansted Airport via Leicester, Peterborough and Cambridge. Trains run hourly in either direction. The service is supplemented with additional trains in the peak on route to/from Nottingham, Norwich and Sleaford. The station is managed by East Midlands Trains although most services are operated by CrossCountry. CrossCountry intend to enhance their service gradually to half-hourly on this route. Since early 2009 East Midlands Trains have offered a single daily journey from Melton Mowbray to London St Pancras and return. This is notable for being the first regular passenger service to cross the spectacular and historic Welland Viaduct since 1966. In 2010, the company introduced a single daily journey to Derby and return.

The majority of bus services in Melton Mowbray are provided by Centrebus. Services link Melton Mowbray with Leicester, Nottingham, Oakham and other regional centres, as well as many of the surrounding villages.

All content from Kiddle encyclopedia articles (including the article images and facts) can be freely used under Attribution-ShareAlike license, unless stated otherwise. Cite this article:
Melton Mowbray Facts for Kids. Kiddle Encyclopedia.