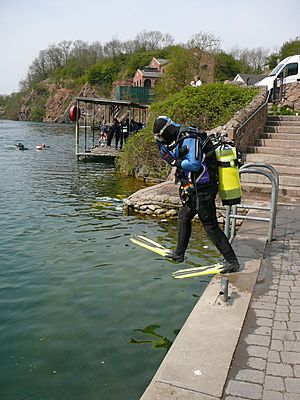 Stoney Cove is a large flooded quarry which is a popular inland scuba diving site, located between Stoney Stanton and Sapcote in Leicestershire, England.

Stoney Cove was originally a granite quarry dating back to the beginning of the 19th century. In 1850 a train line was added to move the granite more easily from the Top Pit to the centre of Stoney Stanton. Spring water was a perennial problem for the quarry, but was a boon in 1958 when quarrying at the site ceased. By 1963 diving pioneers were using the quarry to practise their hobby. Over the next fifteen years Stoney Cove was used to train North Sea oil divers and in 1978 Stoney Cove Marine Trials Ltd was formed to fully exploit the site on a commercial basis.

Stoney Cove is used for scuba diving training as well as pleasure dives and open water swimming. On shore facilities include a dive shop, diving school, cylinder filling station and a public house. The site has a range of depths to 36 metres (118 ft), whilst the underwater attractions include:

All content from Kiddle encyclopedia articles (including the article images and facts) can be freely used under Attribution-ShareAlike license, unless stated otherwise. Cite this article:
Stoney Cove Facts for Kids. Kiddle Encyclopedia.