Flintshire (Welsh: Sir y Fflint) is a county in north-east Wales. It borders the English county of Cheshire to the east, Denbighshire to the west and Wrexham County Borough to the south. It is named after the historic county of Flintshire which has notably different borders. Flintshire is considered part of the Welsh Marches and formed part of the historic Earldom of Chester and Flint. The county is governed by Flintshire County Council which has its main offices in County Hall, Mold.

The largest town in the county is Connah's Quay, followed by Flint, Buckley and Mold.

At the time of the Roman invasion, the area of present-day Flintshire was inhabited by the Deceangli, one of the Celtic tribes in ancient Britain, with the Cornovii to the east and the Ordovices to the west. Lead and silver mine workings are evident in the area, with several sows of lead found bearing the name 'DECEANGI' inscribed in Roman epigraphy. The Deceangli appear to have surrendered to Roman rule with little resistance. Following Roman Britain, and the emergence of various petty kingdoms, the region had been divided into the Hundred of Englefield (Welsh: Cantref Tegeingl), derived from the Latin Deceangli. 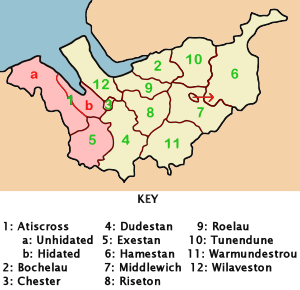 The Domesday Hundreds of Atiscross and Exestan later forming the principal area of Flintshire are shown in pink.

It became part of the Kingdom of Mercia by the 8th century, with much of the western boundary reinforced under Offa of Mercia after 752 CE, but there is evidence that Offa's Dyke is probably a much earlier construction. By the time of the Norman conquest in 1066 it was under the control of Edwin of Tegeingl, from whose Lordship the Flintshire coat of arms is derived. Edwin's mother is believed to have been Ethelfleda or Aldgyth, daughter of Eadwine of Mercia. At the time of the establishment of the Earldom of Chester, which succeeded the Earl of Mercia, the region formed two of the then twelve Hundreds of Cheshire of which it remained a part for several hundred years.

Flintshire today approximately resembles the boundaries of the Hundred of Atiscross as it existed at the time of the Domesday Book. Atiscross, along with the Hundred of Exestan, was transferred from the Earldom of Chester to the expanding Kingdom of Gwynedd from the west in the 13th century following numerous military campaigns. This region, as well as an exclave formed from part of the Hundred of Dudestan (known as Maelor Saesneg), later formed the main areas of Flintshire, established by the Statute of Rhuddlan in 1284 under Edward I. It was administered with the Palatinate of Chester and Flint by the Justiciar of Chester. The county was consolidated in 1536 by the Laws in Wales Acts 1535–1542 under the Tudor King Henry VIII, when it was incorporated into the Kingdom of England. Flintshire remained in existence until 1974 when it was merged with Denbighshire and Edeyrnion Rural District to form the administrative county of Clwyd. Clwyd was abolished only 22 years later and Flintshire re-established in its present form in 1996. However, some parts of the historic country are not included within the present boundaries of Flintshire: significantly English Maelor was incorporated into Wrexham County Borough, and St Asaph, Prestatyn and Rhyl into Denbighshire.

The current administrative area of Flintshire (a unitary authority) came into existence in 1996, when the former administrative county of Clwyd was split into three smaller areas. The principal area was formed by the merger of the Alyn and Deeside and Delyn districts. In terms of pre-1974 divisions, the area comprises

The district of Rhuddlan, which was also formed entirely from the administrative county of Flintshire was included in the new Denbighshire instead. Other parts of the pre-1974 administrative Flintshire to be excluded from the principal area are the Maelor Rural District and the parish of Marford and Hoseley, which became part of the Wrexham Maelor district in 1974 and are now part of Wrexham County Borough.

Flintshire is a maritime county bounded to the north by the Dee estuary, to the east by Cheshire, to the west by Denbighshire and to the south by Wrexham County Borough. The coast along the Dee estuary is heavily developed by industry and the north coast much developed for tourism. The Clwydian Mountains occupy much of the west of the county. The highest point is Moel Famau (1,820 feet/554 metres). The chief towns are Buckley, Connah's Quay, Flint, Hawarden, Holywell, Mold, Queensferry, and Shotton. The main rivers are the Dee (the estuary of which forms much of the coast) and the Clwyd.

Four of the secondary schools have come together with Coleg Cambria to form the Deeside Consortium.

There are two radio stations broadcast in the area – Communicorp station Heart FM and Global Radio station Capital North West and Wales broadcast from the studios based in Wrexham. Whilst BBC Cymru Wales runs a studio and newsroom for their radio, television and online services located at Glyndŵr University but does not base their broadcasting there.

All content from Kiddle encyclopedia articles (including the article images and facts) can be freely used under Attribution-ShareAlike license, unless stated otherwise. Cite this article:
Flintshire Facts for Kids. Kiddle Encyclopedia.