Flint (Welsh: Y Fflint) is a town and community in Flintshire, Wales, lying on the estuary of the River Dee. It is the former county town of Flintshire. According to the 2001 Census, the population of the community of Flint was 12,804, increasing to 12,953 at the 2011 census. The urban area including Holywell and Bagillt had a population of 26,442.

Flint railway station lies on the North Wales Coast Line and is served by Transport for Wales services from Manchester Piccadilly to Llandudno. A north-south service between Cardiff and Holyhead also calls, as do some Avanti West Coast services between London Euston and Holyhead. Bus services are operated by Arriva Buses Wales.

Flint is located in north-east Wales, adjoining the River Dee, to the north of the town of Mold. Across the River Dee, the Wirral can be seen from Flint and views to the south of the town include Halkyn Mountain. As the crow flies, Flint is located less than 12 miles from the English urban area of Liverpool, and even closer to its metro area. However, due to the two bays/rivers in between, driving distance is almost twice as long. 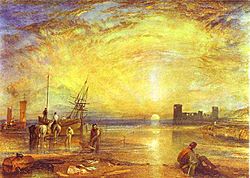 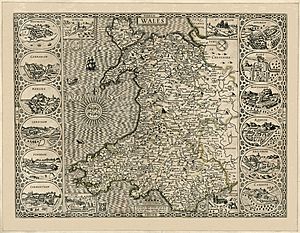 John Speed's map of Wales, made in 1610. The town of Flint can be seen at the top right

The name refers to the stoney platform on which the castle was built, and was first recorded in 1277 in the French form le Chaylou (cf modern French caillou, "gravel"). Flint has the oldest town charter in Wales, dating from 1284.

Edward I began to build Flint Castle in 1277, during his campaign to conquer Wales. Both castle and town were attacked by the forces of Madog ap Llywelyn during the revolt of 1294-95; the defenders of the town burnt it in order to deny its use to the Welsh.

Richard II was handed over to his enemy Henry Bolingbroke in the castle in 1399. As a consequence, it is the setting for Act III, Scene III of the Shakespeare play Richard II. The castle was the first of Edward I's 'iron ring' of royal castles to be built in Wales, and the design served as the basis for larger castles such as Harlech and Rhuddlan. Owain Glyndŵr unsuccessfully assaulted it at the commencement of his revolt in 1400.

The town did not have a wall, but a protective earthen and wooden palisaded ditch. The outline of this remained visible in the pattern of streets until the mid-1960s, and the medieval boundary can still be traced now. This can be seen in John Speed's map of Flintshire.

In 2001 only 18% of the local population identified as Welsh, although this census controversially had no "Welsh" tick box.

In the census of 2011, 57.1% stated they had Welsh, or Welsh and other combined, identity. Many people in Flint have some knowledge of the Welsh language, although competence varies. Implementation of the European Union's freedom of movement provisions has led to a noticeable increase in the numbers of Polish-language speakers in Flint. Several retail businesses display information in Polish as well as in English and Welsh and the town has a number of Polskie sklepy (Polish shops) specialising in Polish products.

The Flint accent is frequently misidentified with that of Liverpool, although it has arisen in fact as a unique blending of the speech patterns of the area's Welsh speakers, earlier Irish settlers, and the residents of nearby Cheshire, Wirral, and the wider Merseyside region.

There are several songs associated with Flint. The most widely sung is "The Yard". Another popular song is "Fifty German bombers over Flint", which tells the story of a wartime bombing raid over nearby Liverpool that accidentally targeted the town of Flint instead. Verses describe the arrival of the bombers over Flint, and how they were shot down by the "Bagillt Navy". Eventually, the ill-fated German aircrew were fished out by the "Greenfield Fishers". The song is often sung in a drunken, friendly manner to the accompaniment of much hand clapping and revelry. 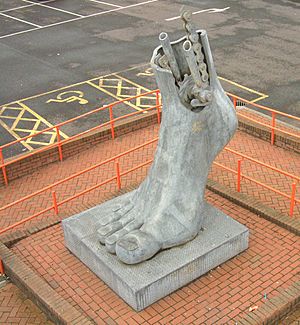 Flint once had its own low-powered television relay transmitter, designed to provide improved coverage of Welsh channels in an area that would otherwise receive only English television signals. Since 2009, signals are now transmitted from Storeton transmitting station on the Wirral.

Perhaps one of the town's most striking images, in addition to the castle, is the group of three tower blocks of flats near the town centre. The first two blocks were built in the 1960s and named Bolingbroke Heights and Richard Heights, with a third, Castle Heights, added shortly afterwards.

Flint has a local football team Flint Town United. They play in the Cymru Alliance.

Brian Fell's sculpture footplate can be seen at Flint railway station. Initially it was thought to be an imitation of the famous Monty Python foot drawn by Terry Gilliam.

The library, leisure centre (renamed in 2012 as the Jade Jones Pavilion) and the town centre have been renovated. Flint Retail Park has also expanded and now Flint is the only town in Flintshire with a Sainsbury's supermarket.

A lifeboat station was established in Flint in 1966, and is run by the RNLI. The lifeboat operates both inshore and inland.

All content from Kiddle encyclopedia articles (including the article images and facts) can be freely used under Attribution-ShareAlike license, unless stated otherwise. Cite this article:
Flint, Flintshire Facts for Kids. Kiddle Encyclopedia.