Queensferry is a town and electoral ward in Flintshire, Wales, lying on the River Dee near the border with England.

Its name derives from the ferries that crossed the River Dee. The settlement of Higher Ferry (Welsh: Y Fferi Uchaf) is now known as Saltney, while Queensferry was named Lower Ferry (Welsh: Y Fferi Isaf). The town's name was changed to Kingsferry on the coronation of King George IV of the United Kingdom in 1820, and became Queensferry on the coronation of Queen Victoria in 1837. 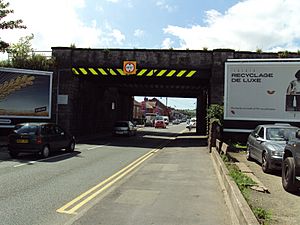 Queensferry lies along the B5441 and B5129 roads, and is bypassed by the A494 dual carriageway. It is contiguous with Deeside. Queensferry is considered part of Deeside, which lends its name to many of Queensferry's features, including the Deeside Leisure Centre, a sports and leisure venue that also hosts music concerts.

The town has a Memorial Institute rather than a cenotaph type of war memorial. It is a corrugated black and white building near the entrance to Asda from the coast road. The Jubilee Bridge, also known as the Blue Bridge, spans the River Dee. It is a double leaf rolling bascule bridge. The railway station served the town on the North Wales Coast Line between 1864 and 1966.

All content from Kiddle encyclopedia articles (including the article images and facts) can be freely used under Attribution-ShareAlike license, unless stated otherwise. Cite this article:
Queensferry, Flintshire Facts for Kids. Kiddle Encyclopedia.