Droitwich Spa (often abbreviated to Droitwich) is a town in northern Worcestershire, England, on the River Salwarpe.

The town was called Salinae in Roman times, then later called Wyche, derived from the Anglo Saxon Hwicce kingdom, referred to as "Saltwich" according to Anglo Saxon charters, with the Droit (meaning "right") added when the town was given its charter on 1 August 1215 by King John. The "Spa" was added in the 19th century when John Corbett developed the town's spa facilities. The River Salwarpe running through Droitwich is likely derived from Sal meaning "salt" and weorp which means "to throw up" i.e. "the river which throws up salt" which overflows from the salt brines.

Droitwich is within the Wychavon area – the only Midlands area to be in the Halifax 'Quality of Life Survey' of 2011. It was 6th overall.

On 4 November 2013 Droitwich Spa Town Council made Max Sinclair an honorary Freeman of the town in recognition of the major role he played in the restoration of Droitwich Canals.

The town is situated on massive deposits of salt, and salt has been extracted there since ancient times. The natural Droitwich brine contains 2½ lbs. of salt per gallon – ten times stronger than sea water and rivalled only by the Dead Sea.

During the Roman era the settlement was known as Salinae and was located at the crossroads of several Roman roads. Railway construction in 1847 revealed Roman mosaic pavements, and later excavations unearthed a Roman villa or corridor house some 44 yards (40 metres) long.

Droitwich remained a fairly small town until the 1960s, when the population was still barely 7,000, but since then it has grown considerably from overspill from Birmingham with many housing estates being developed in the 1970s and '80s. In 2014, new housing consent was granted to large developments at Copcut (750 houses) and Yew Tree Hill (765 houses) with a number of other in-fill developments

In July 2007, Droitwich was hit heavily by the UK-wide flooding caused by some of the heaviest rainfall in many years. The flooding was pictured in UK-wide news, having flooded the majority of the heavily subsided high street. Many shops in the high street remained closed almost a year later. The flooding crossed from the stream and canal in Vines Park, crossed Roman Way, and spilled across to the High Street some 110 yards from the source stream.

Following specialist inspections at Droitwich Spa Brine Baths on 12 December 2008, the facility was closed to allow further building investigations to take place and to avoid any potential hazard to the public or staff. 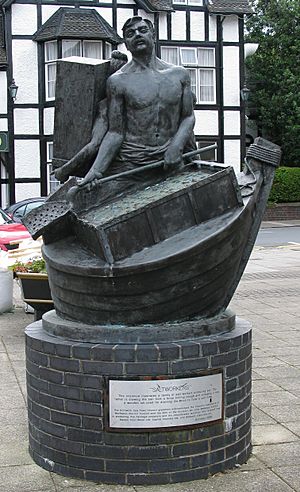 Saltworkers by British sculptor John McKenna in the town centre.

Rock salt and brine was extracted by the Romans and this continued through to the Middle Ages. A salt tax was levied by the king until it was abolished in 1825. A local family named Wintour owned up to 25 salt evaporating pans in the area by the 1600s.

Brine rose naturally to the surface at three sites along the River Salwarpe within Vines Park in the centre of Droitwich. Unusually the brine was fully saturated with sodium chloride, and was extremely valuable because it was economic to boil, and the yield of salt was high. Because of its value the brine was divided into shares, one share comprising 6,912 gallons which produced eight tons of salt annually in the set boiling period. When it rained, particularly in the winter when brine was not being boiled, the rain water which is less dense that saltwater, settled on top of the brine and was readily removed.

Originally brine for boiling was extracted with buckets lowered into the pits which were naturally replenished. Upwich, the deepest of the three pits at 30 feet, supplied most of the brine, while the pit at Netherwich was only 18 feet deep. The Middlewich pit, located between the two, was adversely affected by brine extraction at the other two pits and fell into disuse. Steynor in the 17th century discovered the pit and set up business for himself, but eventually due to the lack of brine he failed to compete with the town monopoly.

The underground brine reservoirs were only 200 feet deep and in 1725 bore-holes were sunk to the base of the pits, accessing brine in almost unlimited quantities and independent of the natural brine flow, and the monopoly ceased. With this production increased and pumps were used to draw brine, however, as a result parts of the town succumbed to subsidence.

In the mid-19th century, Droitwich became famous as a Spa town. Unlike other places, the medicinal benefits were not derived from drinking the spa water, which is almost saturated brine, but from the muscular relief derived from swimming and floating in such a dense, concentrated salt solution, at the town's brine baths (first opened in 1830). The spa water at Droitwich is the warmest in the United Kingdom outside Bath, but it does not meet the most common definition of a hot spring as the water is below standard human body temperature.

The original Brine Baths have long since closed, but a new brine bath (part of the Droitwich Spa private hospital) opened to the public for relaxation and hydrotherapy. But this too was closed in December 2008 due to a dispute between the operator and Wychavon District Council over health and safety inspections.

The salt industry was industrialised and developed in the 19th century by John Corbett who built the nearby Chateau Impney for his Franco-Irish wife in the French 'château' style. He was responsible for the redevelopment of Droitwich as a Spa.

Opened in the 1930s was the town's lido, a large open-air swimming pool, which used diluted brine from beneath the town. After many years of closure it was reopened in 2006. See: Droitwich Spa Lido

Droitwich's first workhouse was set up on Holloway in 1688 and were finally abolished in the 1920s.

Droitwich Lunatic Asylum was established in 1791. Records at the Worcestershire County Record Office show its presence in 1837 to 1838. An advert in the Transactions of the Provincial Medical and Surgical Association (the forerunner of the British Medical Association) in 1844, records that Martin Ricketts, of Droitwich, was the Surgeon and Sir Charles Hastings from the Worcester Infirmary was the Physician.

Until the late 1990s Droitwich Spa Lido was open as a public open-air salt-water swimming pool. Following its closure various schemes were proposed, with significant legal and commercial arguments as to the viability of re-building and reopening this facility.

During autumn of 2006, work started on renovating the lido and it was reopened on Monday 18 June 2007. The Lido Park remains a pleasant and popular space, with Droitwich Cricket Ground on its edge as well as a bandstand with regular performances. 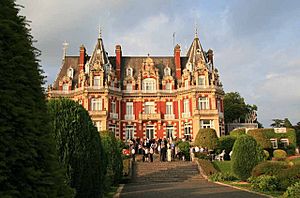 The Norbury Theatre hosts regular shows year-round, including an annual pantomime, and also shows films. The Norbury has an active youth theatre for ages 12 to 18.

On the outskirts of the town is the famous Chateau Impney, built in the style of a traditional French chateau, which is now a hotel, restaurant and conference centre. In Droitwich, the Raven Hotel is a wattle and daub hotel that holds a central position within the town.

Most of the entertainment taking place throughout the year in the town can be found on the website www.droitwichspa.com, a portal for the town of Droitwich.

Arts in the area

Droitwich Spa is rich in artistic talent, with a lively theatre, many skills active including musicians, singers, artists, sculptors, authors and poets plus numerous crafts people. The Droitwich Arts Network exists to advocate and champion the arts and crafts in Droitwich Spa and to act as a collective voice for the arts. See the website: http://www.droitwichartsnetwork.org

The network provides an opportunity to be involved in the various events and projects that are planned in the town, and to take the opportunity to display your work, etc.

Droitwich Spa High School and feeder establishments plus other schools

Droitwich children are also educated at schools outside the town including Worcester's Royal Grammar School and the King's School, Hawford Lodge, the Grange, Bromsgrove School with others typically travelling to Birmingham, Kidderminster, Hagley and Stourbridge by rail. 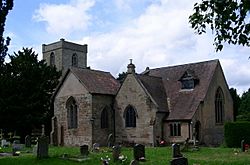 There are six churches in Droitwich including the Anglican church of St Andrew's, a Norman building where St Richard was probably baptised. The church tower was demolished in the 1920s after becoming dangerous due to land subsidence. St. Augustine's at Dodderhill, completed in 1220 and rebuilt in the 18th century on a hill, was the site of a former Roman fort and a later Anglo-Saxon church. St Peter's, built on the site of a former Saxon church, has parts, including the chancel, that date from Norman times, and has a memorial to Edward Winslow, one of the Pilgrim Fathers, who was born in the parish.

St Nicholas was built in Victorian times near the railway station; and the Roman Catholic Church of the Sacred Heart and St Catherine of Alexandria, on a building styled on the Roman basilica churches of Ravenna in Italy, has the feature of the interior walls being covered almost entirely of mosaic and marble designed by Gabriel Pippet. There are also a number of other chapels including Methodist, Baptist and a vibrant Salvation Army hall.

Droitwich Spa is twinned with:

All content from Kiddle encyclopedia articles (including the article images and facts) can be freely used under Attribution-ShareAlike license, unless stated otherwise. Cite this article:
Droitwich Spa Facts for Kids. Kiddle Encyclopedia.