Kids Encyclopedia Facts
This page is about the town in England. For other uses, see Bewdley (disambiguation).

pronunciation) is a town and civil parish in the Wyre Forest District in Worcestershire, England on the banks of the River Severn. It is in the Severn Valley 3 miles (4.8 km) west of Kidderminster and 22 miles (35 km) southwest of Birmingham. It lies on the River Severn, at the gateway of the Wyre Forest national nature reserve, and at the time of the 2011 census had a population of 9,470. Bewdley is a popular tourist destination and is known for the Bewdley Bridge, designed by Thomas Telford. 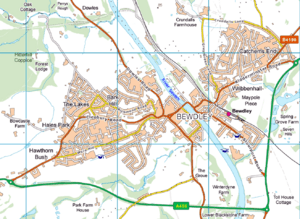 The main part of Bewdley town is situated on the western bank of the River Severn, including the main street — Load Street — whose name derives from lode, an old word for ferry. Load Street is notable for its width: this is because it once also served as the town's market place. Most of Bewdley's shops and amenities are situated along Load Street, at the top of which lies St Anne's Church, built between 1745 and 1748 by Doctor Thomas Woodward of Chipping Campden.

Beyond the church, High Street leads off to the south towards Stourport along the B4194, a road known locally as "the switchback" because of its many undulations. Unlike in many English towns, High Street is so called not because of its importance, but because of its geographical position 'high' above the river. A high, sandy slope locally known as 'Bewdley Beach', on the northern side, is a public space with a 180° panorama. Bewdley has several pubs (some of which are inns), cafés, houses, and restaurants along its facing riversides.

On the other side of the church, Welch Gate (so called because it once contained a tollgate on the road towards Wales) climbs steeply up to the west, while a continuation of the B4194 leads northwest towards the Wyre Forest. To the northeast of the town is the wooded hilltop of Wassel Wood in Trimpley, the southern terminus of Shatterford Hill.

In the area between Stourport and Bewdley there are several large country houses, among which Witley Court, Astley Hall and Pool House are particularly significant.

The settlement of Wribbenhall, on the eastern side of the Severn, and now part of Bewdley, was recorded in the Domesday Book as being part of the manor of Kidderminster. By the 14th century, the town had come to be known as Beau lieu, French for "Beautiful place" - a compliment that fits well with John Leland's statement in his Itinerary two centuries later that "a man cannot wish to see a towne better".

Bewdley was granted borough status, as well as a weekly market, by King Edward IV in 1472, and retained this status until local government reorganisation in 1974. A parliamentary report of 1777 listed Bewdley as having a parish workhouse accommodating up to 80 inmates.

During the Second World War, Ribbesford House in Bewdley was used as the headquarters for the Free French officer cadets. The cadets consisted of 200 teenagers who undertook military training at Ribbesford House until they joined with other allied forces in the D Day invasion.

For many centuries Bewdley had its own Member of Parliament (MP), most famously the Conservative Prime Minister Stanley Baldwin who represented it from 1908–1937, but in 1950 the Bewdley constituency was abolished and the town was included in the Kidderminster constituency. In 1983, the Kidderminster constituency itself was absorbed into the Wyre Forest constituency, which currently encompasses all of Bewdley. The MP for Wyre Forest is Mark Garnier of the Conservative Party, who in 2010 unseated the incumbent, Richard Taylor of Independent Kidderminster Hospital and Health Concern (often simply Health Concern), a local organisation. The Labour Party held the seat from 1997-2001.

The former quayside on the western bank of the river has been much prettified and landscaped over the last few decades, and its rows of Georgian townhouses and buildings are well seen from Telford's bridge. Since the completion of the flood defences in 2006 (see below), a "Civic Space" has been introduced to replace the old bandstand. It is used on a variety of occasions including the regular local Farmers' markets.

Bewdley was in the lower division of Doddingtree Hundred. 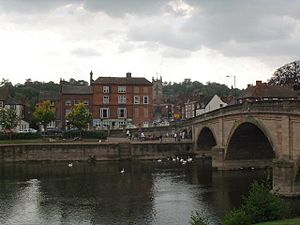 Bewdley bridge and Severn Side South, 2003

The River Severn often used to burst its banks in winter, flooding many houses and commercial premises in Bewdley. However, after the 2000 floods, plans were made for flood defences on the western bank, and this work was completed in April 2006, costing £7 million. Temporary barriers are also put up to protect properties on the Eastern side of the river in Wribbenhall. Among the worst floods in living memory were those in 1947, 1968 and 2000, where 140 properties were affected. Bewdley's long experience of dealing with flooding led to the setting up of the National Flood Forum in the town in 2002.

Bewdley Bridge over the Severn was built in 1798 by Thomas Telford. It was erected to replace the 1483 medieval bridge which was swept away in the floods of 1795. There is some speculation locally that its continued ability to carry heavy motor traffic may be thanks to secret strengthening work carried out during the Second World War to allow the bridge to bear the weight of tanks if necessary.

A modern road bridge, opened to the south-east of the town at Blackstone in 1987 after many decades of campaigning, carries the Bewdley bypass across the river.

The Tenbury and Bewdley Railway branched off Severn Valley Railway at Bewdley, and ran through the Wyre Forest to Tenbury Wells. It crossed the river at Dowles, a little to the north of Bewdley. The bridge itself no longer exists, although its imposing brick and stone pillars remain. 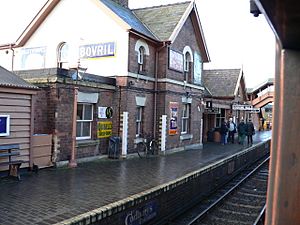 The Bewdley Festival, featuring a variety of artistic performances, is held in the town each October, and Bewdley also hosts one of the largest inland river regattas in the country. The successful Bewdley Beer Festival is held each August Bank Holiday weekend. Bewdley also has a carnival which takes place every June.

Bewdley has a distinguished music scene, and is particularly well known for its intimate country music venues and its many local festivals including Hop Fest, Bewdley music festival, Arley festival and Bewdley Live. Former Led Zeppelin lead- and now solo singer Robert Plant lives in the nearby village of Upper Arley, and has been known to perform in the River Rooms; a small, intimate country music venue above the Cock and Magpie pub on the north riverside. The River Rooms attract country, soul, rock, jazz and pop performers from all cross Europe and North America. Bewdley remains a significant centre for country music within the United Kingdom.

The West Midland Safari Park lies just out of the town, on the A456 towards Kidderminster.

Bewdley was, until an office move in 2014 to Kidderminster, the headquarters of the Severn Valley Railway, a heritage railway running the 16 miles between Kidderminster and Bridgnorth. Bewdley remains the principal intermediate station on the line.

The Queen Elizabeth II Jubilee Gardens (usually abbreviated to simply "Jubilee Gardens") are tucked away between the rear of Bewdley Museum and the River Severn.

Bewdley is on the southeastern edge the Wyre Forest, and there are many footpaths and cycle routes through the unspoilt woodlands. There is a visitor centre situated just outside Bewdley at Callow Hill on the road to Cleobury Mortimer, where many waymarked trails through the forest start from. The Bewdley museum (admission free), housed in the Guildhall (alongside the Tourist Information Centre) explores the history of the town and has displays on local crafts such as coopering, basket making, agriculture, charcoal burning and tanning. It also stages occasional small exhibitions by contemporary local artists.

A regular general market on Saturdays took place until late 2007, although specialized markets have continued. In June 2009, Wyre Forest District Council was approached by a former stall-holder with a view to reviving the market close to the bridge.

Just outside Bewdley is Beau Castle, a Victorian mock-Gothic house, built in 1877. It was developed by the industrialist and former Mayor of Birmingham and Bewdley, George Baker. Beau Castle was designed by John Ruskin and Richard Doubleday with stained-glass windows by Edward Burne-Jones.

Three state schools are located in Bewdley. Of these, two are primary schools: St Anne's CE Primary School on the west side of town and Bewdley Primary School in Wribbenhall on the eastern side of the Severn. Both were founded in 2007 when the region returned to a two-tier education system, replacing the former first and middle schools.

The single secondary school is The Bewdley School.

The Bewdley Grammar School on Lax Lane closed in the 1800s. Since then, the former grammar school has been adapted for many art galleries and art and craft activities. After the closure of Bewdley Grammar School, Bewdley High School & Sixth Form Centre was built on the opposite side of the river with new buildings. In 2007, Bewdley High School closed after 54 years due to an educational tier change that reorganised education as primary and secondary schools. All high schools were being replaced by new secondary schools.

In 2007, after new construction, landscaping, building refurbishments and extensions, The Bewdley School opened as a new secondary school. It has extensive new facilities for the arts, science and outdoor learning. The Bewdley Sixth Form is also part of The Bewdley School, collectively offering GCSE and A Level courses.

In 2019, The Bewdley School won 'Secondary School of the Year' at the Worcestershire Educational Awards. 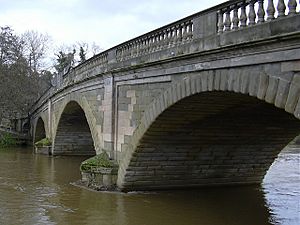 All content from Kiddle encyclopedia articles (including the article images and facts) can be freely used under Attribution-ShareAlike license, unless stated otherwise. Cite this article:
Bewdley Facts for Kids. Kiddle Encyclopedia.