Tenbury Wells (locally Tenbury) is a market town and civil parish in the north-western extremity of the Malvern Hills District of Worcestershire, England, which at the 2011 census had a population of 3,777.

From 1894 to 1974, it was a rural district, comprising itself and villages such as Stoke Bliss, Eastham and Rochford. From 1974 Tenbury was in the District of Leominster until it became part Malvern Hills District when Leominster District Council was taken over by Herefordshire Council in April 1998.

The history of Tenbury Wells extends as far back as the Iron Age. The town is often thought of as the home to the Castle Tump, but this is now in Burford, Shropshire due to boundary changes. Though the Tump, possibly the remains of an early Norman motte and bailey castle, can be seen from the main road (A456) there are no visible remains of the castle that was constructed to defend and control the original River Teme crossing. It has also been described as "... the remains of an 11th century Norman Castle."

A legal record of 1399 mentions a place spelt perhaps as Temedebury which may be a further variation in spelling.

Tenbury was in the upper division of Doddingtree Hundred.

Originally named "Temettebury", the town was granted a Royal Charter to hold a market in 1249. Over time, the name changed to "Tenbury", and then added the "Wells" following the discovery of mineral springs and wells in the town in the 1840s. The name of the railway station, which was on the now-defunct Tenbury & Bewdley Railway, was changed in 1912, in an attempt to publicise the mineral water being produced from the wells around the town.

The St Michael and All Angels Choir School devoted to the Anglican choral tradition by Frederick Ouseley closed in 1985 and the buildings now serve alternative educational purposes.

For over 100 years Tenbury has been well known throughout the country for its winter auctions of holly and mistletoe (and other Christmas products). It is also known for its "Chinese-gothic" Pump Room buildings, built in 1862, which reopened in 2001, following a major restoration. They are now owned by Tenbury Town Council, having been transferred from Malvern Hills District Council in September 2008. 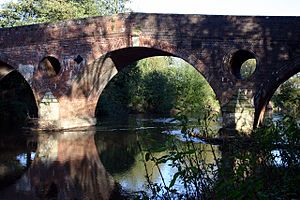 Eastham Bridge near Tenbury, which collapsed in May 2016

One notable architectural feature in the town is the unique (often described as Chinese-Gothic) Pump Rooms, designed by James Cranston in the 1860s, to house baths where the mineral water was available.

Other notable structures in Tenbury include the parish church of St Mary with a Norman tower, and a number of monuments. The church was essential rebuilt by Henry Woodyer between 1864 and 1865.

The part-medieval bridge over the River Teme, linking Tenbury to Burford, Shropshire was rebuilt by Thomas Telford following flood damage in 1795.

The Grade II-listed Eastham bridge dramatically collapsed into the River Teme on 24 May 2016. There were no reports of any casualties.

The Victorian Workhouse, designed by George Wilkinson, was used as the local Council Buildings from 1937 to the early 21st century and is currently being converted into residential housing. The Victorian infirmary behind the workhouse was scheduled to be demolished to create car parking for a new Tesco Superstore.

Markets are held on Tuesday mornings, Friday mornings, and Saturday mornings, in and around the town's Round Market building, which was built by James Cranston in 1858. In 2013, a new monthly 'local producers market' started, initially held near the Pump Rooms, more recently on Teme Street.

Tenbury was also known as "the town in the orchard" due to the large numbers of fruit orchards of apple trees and also pears, quince and plum trees, in the immediate vicinity of the town. This heritage is revisited every October during the Tenbury Applefest. Tenbury Applefest website.

Orchards gay with blossom,
Beauty, there to see,
Hollows where breeze is tender,
Moorlands where wind breaks free;
Sowing, Lambing, and Harvest,
Overlooked by Giant Clee,
Hop Kilns, Farmsteads, and TENBURY,
This is happiness for me;

A proposal to build a biomass power station on a business park failed due to residents' concern about the disruption to local businesses during its construction. The proposal continued to attract protests, and in July 2007 a petition against the plans was signed by more than 2,300 people. In July 2009 it was announced that the £965,000 grant offered to the power station had been withdrawn and the project shelved.

The Regal Cinema on Teme Street in Tenbury Wells opened in 1937. It operated as a commercial cinema as one of six in the Craven Cinemas chain, until the decline of British cinema led to its closure in 1966. Following purchase by Tenbury Town Council to prevent demolition, various volunteer groups have run it.

The Regal has been subject of a Heritage Lottery Fund supported restoration project. Replicas of the 1930s mediterranean murals by artist George Legge have been painted around the auditorium, the detailing on the front of the building has been recreated, and neon lighting has been erected on the front canopy. The building, owned by Tenbury Town Council is now under the management of a trust. Modern equipment now allows the showing of recently released films, live broadcasts and live acts. Paul Daniels was its patron until his death.

In 2016 The Regal in Tenbury has been nominated for the "Britain Has Spirit" award. An award that could see The Regal win £1,000 to host a street party for the Tenbury community if they win the regional vote, and possibly £25,000 if they win the national vote. The Regal are currently in the public voting stage and members of the public have up until the 16th June 2016 to vote for them to win. The competition is being run by Together Mutual Insurance

All content from Kiddle encyclopedia articles (including the article images and facts) can be freely used under Attribution-ShareAlike license, unless stated otherwise. Cite this article:
Tenbury Wells Facts for Kids. Kiddle Encyclopedia.