Duke of Rutland facts for kids 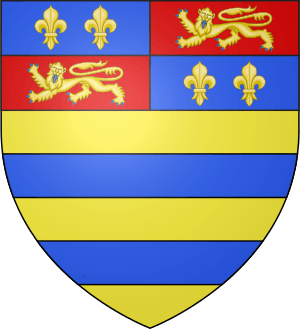 The arms of Manners, Dukes of Rutland

The Duke of Rutland is a title in the Peerage of England named for Rutland, a county in the East Midlands. Earldoms named after Rutland have been created twice in history. The ninth earl of the second creation was made a duke in 1703. The surname of the present duke's family is "Manners". The heir to the title is known as the Marquess of Granby. Other titles: Marquess of Granby (1703), Earl of Rutland (1525), Baron Manners of Haddon (1679) and Baron Roos of Belvoir (1896). The Duke of Rutland is allowed to be addressed as His Grace. The traditional family seats are Haddon Hall in Derbyshire and Belvoir Castle in Leicestershire. 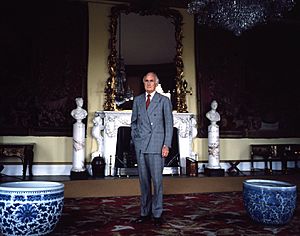 The heir apparent is Charles John Montague Manners, Marquess of Granby (b. 1999), elder son of the 11th Duke

All content from Kiddle encyclopedia articles (including the article images and facts) can be freely used under Attribution-ShareAlike license, unless stated otherwise. Cite this article:
Duke of Rutland Facts for Kids. Kiddle Encyclopedia.