Peter Mark Andrew Phillips (born 15 November 1977) is a member of the British royal family. He is a businessman and the elder child and only son of Anne, Princess Royal, and her first husband, Captain Mark Phillips. He is the eldest grandchild of Queen Elizabeth II and Prince Philip, Duke of Edinburgh, and is 16th in the line of succession to the British throne.

He attended University of Exeter before working at Jaguar Racing. He currently works as a managing director for SEL UK, a boutique sports management company. Phillips married Autumn Kelly, a Canadian management consultant, in 2008 in St George's Chapel at Windsor Castle. They have two children together, and separated in 2019.

Peter Phillips was born at 10:46 am on 15 November 1977, in the Lindo Wing of St Mary's Hospital, London. He was the first child of Princess Anne and Mark Phillips, who had married in 1973. At the time of his birth, there was a 41-gun salute from the Tower of London. He was christened Peter Mark Andrew Phillips on 22 December 1977, by the Archbishop of Canterbury Donald Coggan in the Music Room of Buckingham Palace.

Phillips was fifth in line to the throne at birth and remained so until the birth of his cousin Prince William in 1982. His parents were said to have refused offers from his grandmother Queen Elizabeth II that would have led to his being born in the peerage. Phillips was the first legitimate grandchild of a monarch in more than 500 years to be born without a title or courtesy title. Phillips has a younger sister, Zara Tindall (née Phillips; born 1981), and two younger half-sisters, Felicity Wade (née Tonkin; born 1985), the daughter of Mark Phillips and his former mistress Heather Tonkin; and Stephanie Phillips (born 1997), the daughter from his father's second marriage to Sandy Pflueger.

Phillips went to Port Regis Prep School in Shaftesbury, Dorset before following some of his family by attending Gordonstoun School in Moray, Scotland. Whilst at Gordonstoun, he was chosen to be head boy. During his gap year, he went to Sydney, Australia and worked for Sports Entertainment Limited (SEL), a company he would later return to; he also worked for Jackie Stewart's Formula One racing team during that time.

He went to the University of Exeter and graduated with a degree in sports science. He played for the Exeter University rugby league team.

After his graduation in 2000, Phillips worked for Jaguar as corporate hospitality manager and then for Williams racing team, where he was sponsorship accounts manager. In 2004, while working for Williams, Phillips was in a van in China with three other employees when the van was hit by a car. Phillips was uninjured. He left Williams in September 2005, for a job as a manager at the Royal Bank of Scotland in Edinburgh. In March 2012, he left RBS to take on a role as managing director at SEL UK.

In August 2012 he was guest of honour at the Rugby league Challenge Cup Final between Warrington Wolves and Leeds Rhinos at Wembley.

In the year leading up to June 2016, Phillips was responsible for organising the "Patron's Lunch", in celebration of the Queen's 90th birthday. It included a parade down The Mall and a hamper picnic for 10,000 guests.

In January 2020, Phillips appeared in an advertisement for Chinese company Bright Food. In the video, he uses his status as a "British royal family member" to promote the company's milk, while surrounded by luxury. 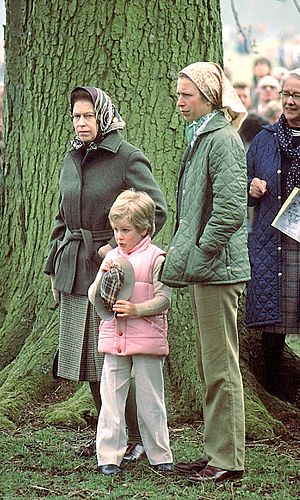 Phillips dated Elizabeth Lorio, a cod liver oil heiress from the United States, for two years; in 2001, they lived together for eight months. Later, he had a four-month relationship with Tara Swain, a flight attendant.

In 2003, Phillips met Autumn Kelly, a Canadian management consultant, at the Formula 1 Canadian Grand Prix in Montreal. Their engagement was announced on 28 July 2007.

Kelly, who was raised in the Roman Catholic Church, was received into the Church of England before her marriage. If she had been Roman Catholic at the time of the marriage, Phillips would have lost his place in the line of the succession to the throne because of the terms of the Act of Settlement 1701. Shortly before their wedding, the couple were interviewed and photographed by Hello! magazine, and were reported to have been paid £500,000, resulting in some concern in royal circles. They married on 17 May 2008 at St George's Chapel in Windsor Castle. The service was conducted by David Conner, the Dean of Windsor. The couple lived in Hong Kong after Phillips changed positions within the Royal Bank of Scotland and became head of their sponsorships activities in the region.

Their first child, and the Queen's first great-grandchild, a daughter named Savannah Anne Kathleen, was born on 29 December 2010 at Gloucestershire Royal Hospital. On 23 April 2011, the Queen was present for the baby's baptism, which took place at Church of the Holy Cross in Avening, Gloucestershire, near Gatcombe Park, the home of Phillips' mother. Savannah is 17th in line to the throne. On 29 March 2012, the couple's second daughter, Isla Elizabeth, was born at Gloucestershire Royal Hospital. She is 18th in line to the throne.

On 11 February 2020, Phillips and his wife confirmed that they had separated in 2019 and announced they were getting divorced.

In March 2021, Phillips was questioned by the police for travelling by car from Gloucestershire to Aberdeenshire to see a friend, despite restrictions on movement during the COVID-19 pandemic in the United Kingdom. The trip was found by the police to be not in violation of any COVID-19 lockdown rules and a spokesperson for Phillips said he was "on a business trip in relation to a company called XL Medical".

All content from Kiddle encyclopedia articles (including the article images and facts) can be freely used under Attribution-ShareAlike license, unless stated otherwise. Cite this article:
Peter Phillips Facts for Kids. Kiddle Encyclopedia.