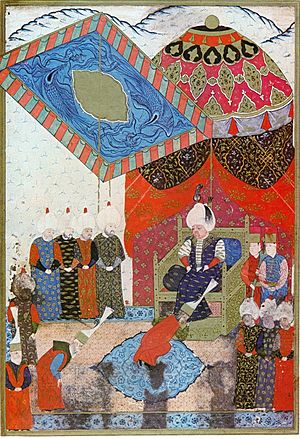 Selim II ascends to the throne

Accession is the attainment or acquisition of a position of rank or power, typically that of monarch or president. For example - "the queen's accession to the throne".

Accession day is a celebration. It is usually the anniversary of when a monarch takes office. The earliest record of accession celebrations are from the reign of Queen Elizabeth I of England.

Accession is not the same as coronation or inauguration. Coronation and inauguration are both ceremonies which take place after the accession.

All content from Kiddle encyclopedia articles (including the article images and facts) can be freely used under Attribution-ShareAlike license, unless stated otherwise. Cite this article:
Accession Facts for Kids. Kiddle Encyclopedia.