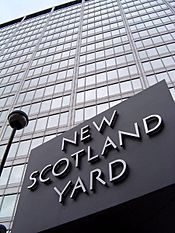 Scotland Yard is the headquarters of the Metropolitan Police in London. This police force is responsible for the security in Greater London.

New Scotland Yard is in a 20-story office block on Broadway and Victoria Street in Westminster, about 450 metres away from the Houses of Parliament. The famous rotating sign, which is seen on television and in films, is outside the main doors on Broadway.

Founded on 29 September 1829, on a street off Whitehall, Scotland Yard was called "New Scotland Yard" when moved, in November 1890, to the Victoria Embankment, beside the Ministry of Defence. In 1967, New Scotland Yard moved to the present 20-story building at 10 Broadway.

Scotland Yard got its name by its previous location which was on Great Scotland Yard. As the Metropolitan police grew more famous, people started referring to the house as Scotland Yard.

All content from Kiddle encyclopedia articles (including the article images and facts) can be freely used under Attribution-ShareAlike license, unless stated otherwise. Cite this article:
Scotland Yard Facts for Kids. Kiddle Encyclopedia.