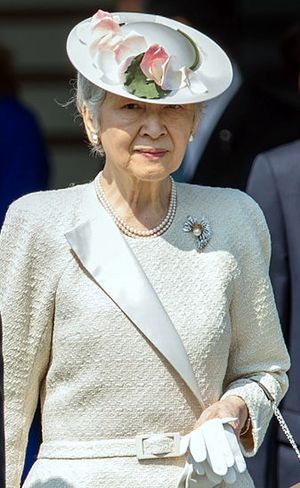 Michiko Shōda was born at University of Tokyo Hospital in Tokyo. She is the eldest daughter of Hidesaburo Shōda and Fumiko Soejima, president and later honorary chairman of Nisshin Flour Milling Company.

In 1957, she earned a BA degree at the University of the Sacred Heart, Tokyo. 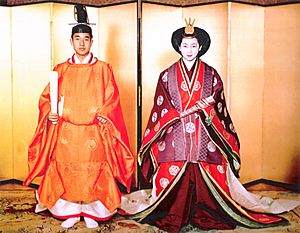 When she married, she became Crown Princess Michiko. She became Empress Michiko in 1989 when her husband became Emperor.

Empress Michiko is the mother of two sons and a daughter.

In August 2019, it was revealed that she was diagnosed with early-stage breast cancer in July 2019. Empress Michiko had cancer surgery in September of the year.

All content from Kiddle encyclopedia articles (including the article images and facts) can be freely used under Attribution-ShareAlike license, unless stated otherwise. Cite this article:
Empress Michiko Facts for Kids. Kiddle Encyclopedia.