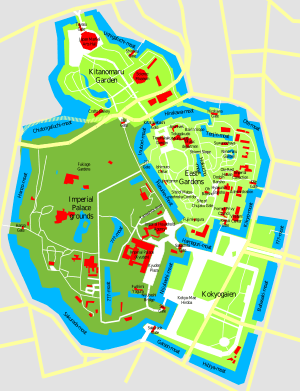 Map of the Imperial Palace and surrounding gardens 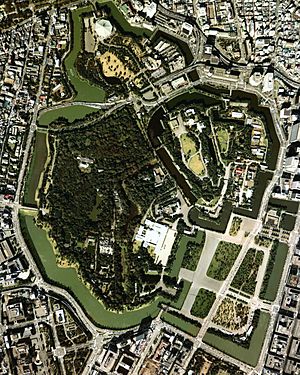 Aerial photograph of Imperial Palace of Japan in 1979

Tokyo Imperial Palace (皇居code: ja is deprecated , Kōkyo; literally, "Imperial Residence") is the official home of the Emperor of Japan. It is the site of the old Edo castle.

The Imperial Palace is in the Chiyoda area near to Tokyo Station.

The kōkyo is a large park-like space in central Tokyo.

The palace complex has several buildings. including the main palace (Kyūden (宮殿code: ja is deprecated ). There are also the private homes of the imperial family and the offices of the Imperial Household Agency.

All content from Kiddle encyclopedia articles (including the article images and facts) can be freely used under Attribution-ShareAlike license, unless stated otherwise. Cite this article:
Tokyo Imperial Palace Facts for Kids. Kiddle Encyclopedia.