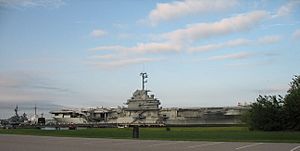 Patriots Point Naval & Maritime Museum is located in Mount Pleasant, South Carolina, at the mouth of the Cooper River on the Charleston Harbor, across from Charleston. 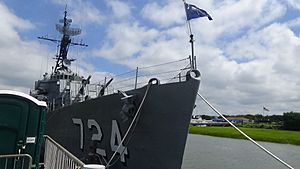 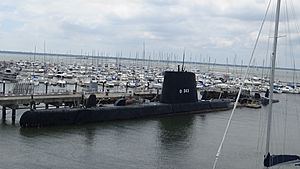 Yorktown has many exhibits on board, including:

Patriots Point has continued to grow; serving as an embarkation point for Fort Sumter tour boats, being home to several other vessels (including the submarine USS Clamagore), the Cold War Submarine Memorial, a replica of a Vietnam Support Base, and the museum of the Medal of Honor Society. Patriots Point celebrated their 10 millionth visitor in February 2017.

On 2 September 2003, Yorktown served as the backdrop for the formal announcement of Senator John Kerry's candidacy as he sought, and ultimately won, the Democratic nomination for President of the United States for the 2004 election.

All content from Kiddle encyclopedia articles (including the article images and facts) can be freely used under Attribution-ShareAlike license, unless stated otherwise. Cite this article:
Patriots Point Facts for Kids. Kiddle Encyclopedia.