Mount Pleasant is a large suburban town in Charleston County, South Carolina, United States. In the Low Country, it is the fourth largest municipality and largest town in South Carolina, and for several years was one of the state's fastest-growing areas, doubling in population between 1990 and 2000. The population was 67,843 at the 2010 census. The estimated population in 2019 was 91,684.

At the foot of the Arthur Ravenel Bridge is Patriots Point, a naval and maritime museum, home to the World War II aircraft carrier USS Yorktown, which is now a museum ship. The Ravenel Bridge, an eight-lane highway that was completed in 2005, spans the Cooper River and links Mount Pleasant with the city of Charleston.

The site of Mount Pleasant was originally occupied by the Sewee people, an Algonquian language-speaking tribe. The first white settlers arrived from England on July 6, 1680, under the leadership of Captain Florentia O'Sullivan. Captain O'Sullivan had been granted 2,340 acres (950 ha), which included not only the island that bears his name, but also the land that was to become Mount Pleasant. On the earliest map of the time this area was called "North Point".

In 1696, 51 new settlers arrived. Each family was allotted several hundred acres in the area that became known as Christ Church parish. In 1706 the Province of Carolina withstood several attacks by the Spanish and the French from their settlements to the south and were victorious in defeating French invaders in an area known as "Abcaw".

The area of "Abcaw" was Hobcaw Plantation, located between Shem Creek and the Wando River. Later, it was also known as Shipyard Plantation because its deep water and abundance of good timber made it ideal for a prosperous shipbuilding enterprise. Lands adjacent to Hobcaw Point were owned at different times by several different families, many of which maintained ferries which served Mount Pleasant. 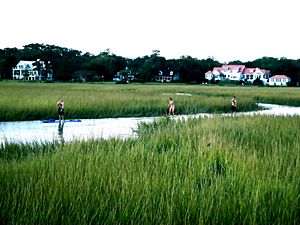 On September 24, 1860, a public meeting was held in Mount Pleasant that produced the first secession resolution of the state. The secession convention met in Charleston on December 20, 1860. With the advent of the Civil War, Battery Guerry and an adjacent floating battery between Mount Pleasant and Sullivan's Island were instrumental in defense of the town, as well as attacks on Fort Sumter. The town was also defended by a line of fortifications from Elliot's Creek at Boone Hall to Copahee Sound. Mount Pleasant was the secret training ground for the nine-man crew of the Confederate submarine H. L. Hunley. It was from Breach Inlet in 1864 that this small vessel was launched to attack and sink the USS Housatonic. 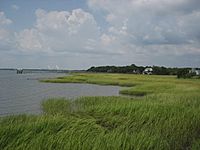 View from the old Pitt Street Bridge in Old Village

The original plank-and-barrel constructed footbidge, later known as the Pitt Street Bridge at the foot of the Old Village area in Mount Pleasant, is the point where the crew of the H.L. Hunley crossed en route to Breach Inlet to test-pilot the famous submarine. The original plank bridge was replaced by a trolley bridge in 1899, before a steel drawbridge was built for vehicle access between Sullivan's Island and Mount Pleasant in 1929. The Pitt Street bridge was dismantled in 1945, and the remains can still be seen in the Intracostal Waterway. The area has been maintained since then as the Pickett Bridge Recreation Area, named after the town's doctor Otis Pickett.

The "Old Village" is Mount Pleasant's oldest neighborhood; the oldest home, 111 Hibben Street (the Hibben House) was constructed in 1755 by Jacob Motte, a French Huguenot. The Old Village is centered on the Pitt Street Shops at the northwestern end of Pitt Street, home to the Pitt Street Pharmacy which was featured on the Food Network and has been in business at this location for more than 60 years.

As a result of the Civil War, slaves were freed who had worked the area plantations; in 1875 in Charleston County, 73% of the population was African American. Some developed Scanlonville, one of the first African-American communities to be formed in the Charleston area after the Civil War, and which still exists today within Mount Pleasant. Robert Scanlon, a former slave and freedman carpenter, purchased the 614-acre (248 ha) property known as Remley's Plantation, bordering Charleston harbor along the Wando River in Mount Pleasant. Robert Scanlon was the president and founder of the Charleston Land Company, formed by 100 poor African-American men of Charleston who pooled their resources and paid $10 per share to purchase large tracts of land in the area. The Charleston Land Company divided it into lots for freedmen seeking to own their own land. Remley's Plantation was divided into farm lots and town lots (which were smaller) to form the community of Scanlonville. The Charleston Land Company and Scanlonville are one of four known cooperative real estate development ventures among African-American freedmen after the Civil War. 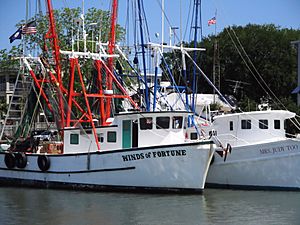 West of Scanlonville is Riverside, formerly the largest and oldest of five black beaches in Charleston County, established when public facilities were segregated under state law. Riverside officially opened in 1930 and featured a dance pavilion, athletics field, bathhouse, playground and a boardwalk along the Wando River. Riverside Pavilion was the only venue for black Charlestonians to see musical legends like Duke Ellington, Count Basie, Louis Armstrong, B.B. King, and Ivory Joe Hunter. Music performances at the Pavilion spawned juke joints, or night clubs, in Scanlonville and eventually a hotel called White's Paradise – where James Brown was known to have frequented. After the original park owner died in 1975, operations of the Riverside property were taken over by Charleston County. It eventually sold the property to a real estate company that developed the land as a private gated community.

On September 21, 1989, Mount Pleasant was hit by Hurricane Hugo, a Category Four hurricane. While the town was spared from the worst of the storm (Category 4 conditions were suffered by areas further north of the town), the town and its neighboring barrier islands were still hard-hit. Children who lived through the storm were featured in an early episode of Nickelodeon's Nick News, along with children from Hurricane Andrew. The town experienced its largest growth spurt a year after the storm as more people moved to the area, increasing in a decade from a population of roughly 23,000 in 1990 to one of roughly 47,000 in 2000.

Mount Pleasant is separated from Charleston by the Cooper River. For many years, the town was primarily populated seasonally by Charleston residents wealthy enough to afford summer homes across the river from the Charleston peninsula. The population of Mount Pleasant was centered in an area of the town now known as the "Old Village".

The county seat for Berkeley County was located in Mount Pleasant from 1882 until 1895, when it was moved to Moncks Corner. 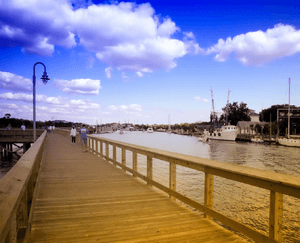 In 1928, a bridge from the Charleston Peninsula to Mount Pleasant was built. Spanning Town Creek and the Cooper River and crossing the uninhabited Drum Island, the two-lane Grace Memorial Bridge was opened as a toll bridge. A second and larger bridge, the Silas N. Pearman Bridge, opened in 1966.

On July 16, 2005, the eight-lane Arthur Ravenel Bridge opened for automotive traffic, replacing the two aging bridges. A week before the new bridge, one of the longest cable-stayed bridges in the Western Hemisphere, officially opened, pedestrians were allowed to cross the bridge, and commemorative coins were distributed. Also, a fireworks display was a part of the ceremonies leading up to the actual opening of the bridge. Several cars from the same time period as the Grace Memorial Bridge, including several restored Model A Fords, made a final crossing of the old bridges. The remaining portions of the old bridges were demolished. Local residents watched as the bridges were explosively demolished over several weeks, through the summer of 2006.

In 2004, Mount Pleasant became one of the first cities in the United States to pass a "pay-before-you-pump" gas ordinance.

All content from Kiddle encyclopedia articles (including the article images and facts) can be freely used under Attribution-ShareAlike license, unless stated otherwise. Cite this article:
Mount Pleasant, South Carolina Facts for Kids. Kiddle Encyclopedia.