Awendaw was named by the Sewee tribe. It is also home to an oyster shell mound created by the Sewee tribe. It is the northernmost shell ring in a group that stretches south to the tip of Florida. Most of the mound is still intact. The rest of it was destroyed to construct roads and homes for the citizens of Awendaw. Awendaw was settled in 1696 as "Wappetaw" by settlers from Salem, Massachusetts, who had left after the Salem Witch Trials. The town was heavily damaged by Hurricane Hugo in September 1989, but did not receive as significant damage in 2004 when Hurricane Gaston made landfall in the region. In 1992, the town of Awendaw was first incorporated and elected Willam H. Alston as the first Mayor. Alston served as Mayor until 2009.

The Sewee Mound was listed on the National Register of Historic Places in 1970.

In 2001, the town's public library was opened as the "Awendaw Community Library". Currently named the William H. Alston Municipal Public Library, it is one of two municipal public libraries in the state.

In 2011, Tractor Supply Company opened a new store. It was the first national chain of its kind to open in Awendaw.

To many Awendaw citizens, crabbing is a hobby and one of the town's main economic resources. Every year in the summer, the town has the Blue Crab Festival.

As of January 2017, the school district is moving forward with plans for a new high school in Awendaw. Location to be a 184-acre tract on Doar Rd. 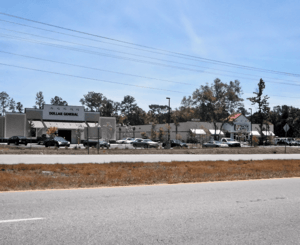 All content from Kiddle encyclopedia articles (including the article images and facts) can be freely used under Attribution-ShareAlike license, unless stated otherwise. Cite this article:
Awendaw, South Carolina Facts for Kids. Kiddle Encyclopedia.