Douglas A-1 Skyraider facts for kids 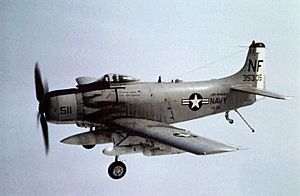 The Douglas A-1 Skyraider is an attack aircraft designed and built in the United States. Its first flight was in 1945, but it was too late to be flown in World War II. Originally designed for the US Navy, it was also used by the US Air Force, Fleet Air Arm and French Air Force. It was used by US pilots in the Korean War and Vietnam War, and by the French in the Algeria War. Some were modified for reconnaissance or electronic warfare. Before 1962, the US Navy's A-1 were called AD.

All content from Kiddle encyclopedia articles (including the article images and facts) can be freely used under Attribution-ShareAlike license, unless stated otherwise. Cite this article:
Douglas A-1 Skyraider Facts for Kids. Kiddle Encyclopedia.