Act of Congress facts for kids 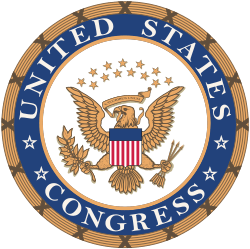 Seal of the United States Congress

Senators and Representatives create thousands of written proposals each year for new laws. Called bills, only a few few ever make it all the way through the process to become a law. The Constitution requires only three steps: passing the House, passing the Senate and approval by the President. The actual process has become much more complicated.

A bill may be proposed by anyone but only a member of Congress, called the bill's sponsor, may introduce them on the floor of one of the houses of Congress. A bill may be introduced in both the Senate and House at the same time. In theory, this saves time over sending it though one house, then the other. In each house of Congress, a bill is sent to a committee. A committee studies the bill and recommends changes. If a committee does nothing, the bill is considered "dead". A committee may also add other unrelated provisions to a bill called amendments. Committees usually divide themselves into smaller groups called subcommittees. The bill's sponsors then try to convince the subcommittees to approve the bill. They do this through hearings. If the bill passes through a committee it is sent to the floor for debate and a vote. A bill may either be passed by be defeated. If passed, it is sent to the other house of Congress to follow the same procedures.

All content from Kiddle encyclopedia articles (including the article images and facts) can be freely used under Attribution-ShareAlike license, unless stated otherwise. Cite this article:
Act of Congress Facts for Kids. Kiddle Encyclopedia.