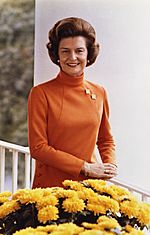 The Michigan Women's Hall of Fame (MWHOF) honors distinguished women, both historical and contemporary, who have been associated with the U.S. state of Michigan. The hall of fame was founded in 1983 by Gladys Beckwith and is sponsored by the Michigan Women's Studies Association. The formation of the Association and the Hall was prompted by five professors from Michigan State University, who were teaching a Women in American Society course.

Nominations to the hall of fame are accepted from the public and are open to women who rose to prominence or were born in Michigan, as well as those who have lived in the state for an extended period. A screening committee ranks the nominations by merit and a second committee makes the final determination, generally selecting eight to ten women annually for induction. Inductees are honored at a ceremony and dinner in October and are presented with a bronze Lifetime Achievement Award. As of 2013, the Hall of Fame contains over 275 inductees.

The MWHOF is housed in the Cooley-Haze House, built in 1903 and located at 213 W. Malcolm X St. (formerly W. Main Street), directly south of downtown Lansing, Michigan. The museum is surrounded by Cooley Gardens. It contains a resource library, as well as exhibit galleries dedicated to preserving and presenting Michigan women's history and art. The house was opened to the public on June 10, 1987. The Center also contains the Belen Gallery, which features art from Michigan women.

All content from Kiddle encyclopedia articles (including the article images and facts) can be freely used under Attribution-ShareAlike license, unless stated otherwise. Cite this article:
Michigan Women's Hall of Fame Facts for Kids. Kiddle Encyclopedia.