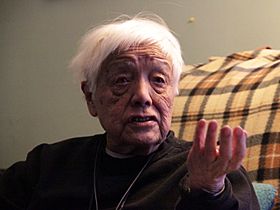 Grace Lee Boggs (June 27, 1915 – October 5, 2015) was an American author. She protested inequality against women and smaller racial groups.  She was known for her years of political work with C.L.R. James and Raya Dunayevskaya in the 1940s and 1950s.

Boggs was born in Providence, Rhode Island. Her parents were Chin Lee and Lin Yan Lee. She was raised in Queens, New York City. Boggs studied at Barnard College and at Bryn Mawr College.

She met her husband, James Boggs at a major newspaper, where she was given a job to check the newspaper for errors. James Boggs was an African American auto worker and writer.

Boggs and her husband focused on black rights. In 1970, they started The National Organization for an American Revolution. The organization helped stop the population of Detroit, Michigan from leaving by supplying food and building connections between neighborhoods. They started food banks and helped start groups that stopped the turn off of power sources.

After her husband’s death in 1993, Boggs started her own programs.  In 2013, she started the James and Grace Lee Boggs School, which is a charter school for the kids of Detroit.

By 1998, she had written four books, along with a book about herself. In 2011, she wrote a fifth book, The Next American Revolution: Sustainable Activism for the Twenty-First Century, co-written by Scott Kurashige and published by the University of California Press.

Boggs died in Detroit, Michigan at the age of 100. Many people grieved the death of Grace Lee Boggs, including the United States president at the time, Barack Obama.

All content from Kiddle encyclopedia articles (including the article images and facts) can be freely used under Attribution-ShareAlike license, unless stated otherwise. Cite this article:
Grace Lee Boggs Facts for Kids. Kiddle Encyclopedia.