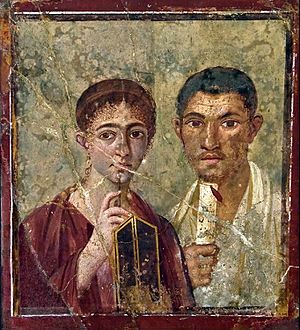 This wall painting found in the Roman city of Pompeii is an example of a primary source about people in Pompeii in Roman times. (Portrait of Paquius Proculo)

From a letter of Philip II, King of Spain, 16th century

All content from Kiddle encyclopedia articles (including the article images and facts) can be freely used under Attribution-ShareAlike license, unless stated otherwise. Cite this article:
Primary source Facts for Kids. Kiddle Encyclopedia.