Afterglow of neutron star collision in NGC 4993
Not to be confused with Gravity wave.

Gravitational waves are ripples in spacetime which are created whenever objects with mass move. They were predicted by Albert Einstein in 1916 on the basis of his theory of general relativity. They were first directly detected on 14 September 2015.

In 1993, the Nobel Prize in Physics was awarded for measurements of the Hulse-Taylor binary star system that suggests gravitational waves are more than mathematical anomalies.

A simple device theorised to detect the expected wave motion is called a Weber bar – a large, solid bar of metal isolated from outside vibrations. This type of instrument was the first type of gravitational wave detector. Strains in space due to an incident gravitational wave excite the bar's resonant frequency and could thus be amplified to detectable levels. Conceivably, a nearby supernova might be strong enough to be seen without resonant amplification. With this instrument, Joseph Weber claimed to have detected daily signals of gravitational waves. His results, however, were contested in 1974 by physicists Richard Garwin and David Douglass. Modern forms of the Weber bar are still operated, cryogenically cooled, with superconducting quantum interference devices to detect vibration. Weber bars are not sensitive enough to detect anything but extremely powerful gravitational waves.

MiniGRAIL is a spherical gravitational wave antenna using this principle. It is based at Leiden University, consisting of an exactingly machined 1,150 kg sphere cryogenically cooled to 20 millikelvins. The spherical configuration allows for equal sensitivity in all directions, and is somewhat experimentally simpler than larger linear devices requiring high vacuum. Events are detected by measuring deformation of the detector sphere. MiniGRAIL is highly sensitive in the 2–4 kHz range, suitable for detecting gravitational waves from rotating neutron star instabilities or small black hole mergers.

There are currently two detectors focused on the higher end of the gravitational wave spectrum (10−7 to 105 Hz): one at University of Birmingham, England, and the other at INFN Genoa, Italy. A third is under development at Chongqing University, China. The Birmingham detector measures changes in the polarization state of a microwave beam circulating in a closed loop about one meter across. Both detectors are expected to be sensitive to periodic spacetime strains of h ~ 6987200000000000000♠2×10−13 /√Hz, given as an amplitude spectral density. The INFN Genoa detector is a resonant antenna consisting of two coupled spherical superconducting harmonic oscillators a few centimeters in diameter. The oscillators are designed to have (when uncoupled) almost equal resonant frequencies. The system is currently expected to have a sensitivity to periodic spacetime strains of h ~ 6983200000000000000♠2×10−17 /√Hz, with an expectation to reach a sensitivity of h ~ 6980199999999999999♠2×10−20 /√Hz. The Chongqing University detector is planned to detect relic high-frequency gravitational waves with the predicted typical parameters ≈1011 Hz (100 GHz) and h ≈10−30 to 10−32.

A more sensitive class of detector uses a laser Michelson interferometer to measure gravitational-wave induced motion between separated 'free' masses. This allows the masses to be separated by large distances (increasing the signal size); a further advantage is that it is sensitive to a wide range of frequencies (not just those near a resonance as is the case for Weber bars). After years of development the first ground-based interferometers became operational in 2015. Currently, the most sensitive is LIGO – the Laser Interferometer Gravitational Wave Observatory. LIGO has three detectors: one in Livingston, Louisiana, one at the Hanford site in Richland, Washington and a third (formerly installed as a second detector at Hanford) that is planned to be moved to India. Each observatory has two light storage arms that are 4 kilometers in length. These are at 90 degree angles to each other, with the light passing through 1 m diameter vacuum tubes running the entire 4 kilometers. A passing gravitational wave will slightly stretch one arm as it shortens the other. This is precisely the motion to which an interferometer is most sensitive.

Even with such long arms, the strongest gravitational waves will only change the distance between the ends of the arms by at most roughly 10−18 m. LIGO should be able to detect gravitational waves as small as h ~ 6978500000000000000♠5×10−22. Upgrades to LIGO and Virgo should increase the sensitivity still further. Another highly sensitive interferometer, KAGRA, which is located in the Kamioka Observatory in Japan, is in operation since February 2020. A key point is that a tenfold increase in sensitivity (radius of 'reach') increases the volume of space accessible to the instrument by one thousand times. This increases the rate at which detectable signals might be seen from one per tens of years of observation, to tens per year.

Interferometric detectors are limited at high frequencies by shot noise, which occurs because the lasers produce photons randomly; one analogy is to rainfall – the rate of rainfall, like the laser intensity, is measurable, but the raindrops, like photons, fall at random times, causing fluctuations around the average value. This leads to noise at the output of the detector, much like radio static. In addition, for sufficiently high laser power, the random momentum transferred to the test masses by the laser photons shakes the mirrors, masking signals of low frequencies. Thermal noise (e.g., Brownian motion) is another limit to sensitivity. In addition to these 'stationary' (constant) noise sources, all ground-based detectors are also limited at low frequencies by seismic noise and other forms of environmental vibration, and other 'non-stationary' noise sources; creaks in mechanical structures, lightning or other large electrical disturbances, etc. may also create noise masking an event or may even imitate an event. All of these must be taken into account and excluded by analysis before detection may be considered a true gravitational wave event.

The simplest gravitational waves are those with constant frequency. The waves given off by a spinning, non-axisymmetric neutron star would be approximately monochromatic: a pure tone in acoustics. Unlike signals from supernovae or binary black holes, these signals evolve little in amplitude or frequency over the period it would be observed by ground-based detectors. However, there would be some change in the measured signal, because of Doppler shifting caused by the motion of the Earth. Despite the signals being simple, detection is extremely computationally expensive, because of the long stretches of data that must be analysed.

The Einstein@Home project is a distributed computing project similar to SETI@home intended to detect this type of gravitational wave. By taking data from LIGO and GEO, and sending it out in little pieces to thousands of volunteers for parallel analysis on their home computers, Einstein@Home can sift through the data far more quickly than would be possible otherwise.

Space-based interferometers, such as LISA and DECIGO, are also being developed. LISA's design calls for three test masses forming an equilateral triangle, with lasers from each spacecraft to each other spacecraft forming two independent interferometers. LISA is planned to occupy a solar orbit trailing the Earth, with each arm of the triangle being five million kilometers. This puts the detector in an excellent vacuum far from Earth-based sources of noise, though it will still be susceptible to heat, shot noise, and artifacts caused by cosmic rays and solar wind. 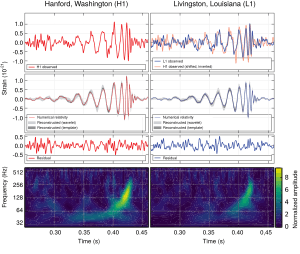 LIGO measurement of the gravitational waves at the Hanford (left) and Livingston (right) detectors, compared to the theoretical predicted values.

On 11 February 2016, the LIGO collaboration announced the first observation of gravitational waves, from a signal detected at 09:50:45 GMT on 14 September 2015 of two black holes with masses of 29 and 36 solar masses merging about 1.3 billion light-years away. During the final fraction of a second of the merger, it released more than 50 times the power of all the stars in the observable universe combined. The signal increased in frequency from 35 to 250 Hz over 10 cycles (5 orbits) as it rose in strength for a period of 0.2 second. The mass of the new merged black hole was 62 solar masses. Energy equivalent to three solar masses was emitted as gravitational waves. The signal was seen by both LIGO detectors in Livingston and Hanford, with a time difference of 7 milliseconds due to the angle between the two detectors and the source. The signal came from the Southern Celestial Hemisphere, in the rough direction of (but much farther away than) the Magellanic Clouds. The gravitational waves were observed in the region more than 5 sigma (in other words, 99.99997% chances of showing/getting the same result), the probability of finding enough to have been assessed/considered as the evidence/proof in a experiment of statistical physics.

Since then LIGO and Virgo have reported more gravitational wave observations from merging black hole binaries.

On 16 October 2017, the LIGO and Virgo collaborations announced the first-ever detection of gravitational waves originating from the coalescence of a binary neutron star system. The observation of the GW170817 transient, which occurred on 17 August 2017, allowed for constraining the masses of the neutron stars involved between 0.86 and 2.26 solar masses. Further analysis allowed a greater restriction of the mass values to the interval 1.17–1.60 solar masses, with the total system mass measured to be 2.73–2.78 solar masses. The inclusion of the Virgo detector in the observation effort allowed for an improvement of the localization of the source by a factor of 10. This in turn facilitated the electromagnetic follow-up of the event. In contrast to the case of binary black hole mergers, binary neutron star mergers were expected to yield an electromagnetic counterpart, that is, a light signal associated with the event. A gamma-ray burst (GRB 170817A) was detected by the Fermi Gamma-ray Space Telescope, occurring 1.7 seconds after the gravitational wave transient. The signal, originating near the galaxy NGC 4993, was associated with the neutron star merger. This was corroborated by the electromagnetic follow-up of the event (AT 2017gfo), involving 70 telescopes and observatories and yielding observations over a large region of the electromagnetic spectrum which further confirmed the neutron star nature of the merged objects and the associated kilonova.

All content from Kiddle encyclopedia articles (including the article images and facts) can be freely used under Attribution-ShareAlike license, unless stated otherwise. Cite this article:
Gravitational wave Facts for Kids. Kiddle Encyclopedia.