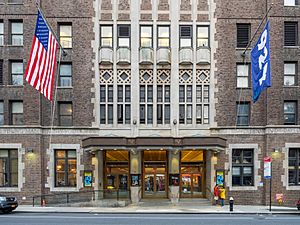 92nd Street Y (92Y) is a cultural and community center located on the Upper East Side of Manhattan in New York City, at the corner of East 92nd Street and Lexington Avenue. Its full name is 92nd Street Young Men's and Young Women's Hebrew Association (YM-YWHA). It is not part of the YMCA. 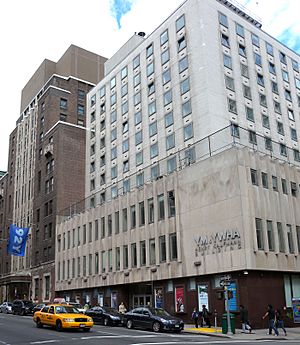 In addition to presenting performing arts programs (classical, jazz and popular music as well as dance performances), it offers a series of talks and conversations; literary readings; film screenings; adult education; schools for music, art and dance for children and adults; professional development programs (early childhood, dance, business and fashion); family, parenting and children's activities and classes; a nursery school; a senior center; a fitness center (including fitness classes and swim team); camps; a residence that rents rooms in the Y's main building at 92nd Street and Lexington Avenue; Jewish education, cultural and community programs; and educational outreach programs for public school children among its programs. The organization serves about 300,000 people annually in its New York facilities.

In recent years, 92Y has expanded its digital programming to include live webcasts of events and a free digital archive at 92YOnDemand.org that includes both stage events and web-only content. In 2012, 92Y founded #GivingTuesday, which established the Tuesday after Thanksgiving as a day to celebrate and encourage giving. The initiative was inspired by the core Jewish value of Tikkun olam (repairing the world) and reflects the institution’s mission of reimagining community and giving back. 92Y is also one of the founding partners of the annual Social Good Summit, a conference that attracts NGO, tech and business leaders and entrepreneurs, which takes place in September (during UN Week). 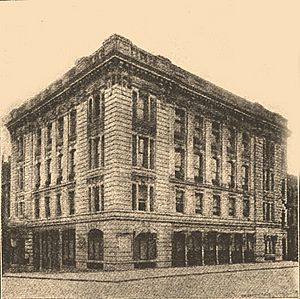 Founded in 1874 as the Young Men's Hebrew Association (YMHA) by German-Jewish professionals and businessmen, 92nd Street Y has grown into an organization guided by Jewish principles but serving people of all races and faiths. The YMHA founded in 1889 The Educational Alliance, together with the Aguilar Free Library, and the Hebrew Institute.

In 1935, William Kolodney joined the 92nd Street Y as Educational Director, instituting a wide-ranging educational program for general audiences of all faiths. He made the "Y" a center for chamber music, poetry readings, and dance performances. He initiated the Y's dance center, School of Music and poetry center. The last is now called the Unterberg Poetry Center and has been led by prominent writers including American poet Karl Kirchwey who was director for thirteen years until 2000.

The Belfer Center for Innovation & Social Impact brings the mission of 92nd Street Y to the world. Collaborators include the UN Foundation, Mashable, Hoover Institution at Stanford University, Harvard Kennedy School, Public Radio International, United Nations Entity for Gender Equality and the Empowerment of Women, the Bill and Melinda Gates Foundation, and the John Templeton Foundation.

In October 2008, 92Y opened a new performance space in Tribeca called 92YTribeca to bring together and inspire a diverse community of young people from New York City and beyond, including musicians, artists, filmmakers, performers, writers, educators, humorists, directors, speakers, sports enthusiasts and many others. 92YTribeca was located at 200 Hudson Street and featured a performance stage with full bar for live music, comedy, theater, digital media, performance art, speakers and dance; a 72-seat movie theater that featured a variety of domestic and international films, shorts and digital media; a wireless cafe; serving fresh, local food and drinks; a lecture hall and rooms for talks, tastings, classes and more; and an art gallery offering rotating exhibits. Other programs included Jewish cultural events and celebrations, opportunities for community service throughout the city, and fun activities like summer softball in Central Park and whitewater rafting trips. In March 2013 it was announced that the 92YTribeca location would be closing that summer.

Notable individuals who have resided at 92nd Street Y include Joseph Gurwin (1920–2009), a philanthropist who rented a room at 92nd Street Y for four years after arriving in the U.S. Pianist Harry Connick Jr. lived there at age 18 when he first moved to New York in 1985. Ceramicist River Valadez lived there for 19 months while making much of his early work.

All content from Kiddle encyclopedia articles (including the article images and facts) can be freely used under Attribution-ShareAlike license, unless stated otherwise. Cite this article:
92nd Street Y Facts for Kids. Kiddle Encyclopedia.