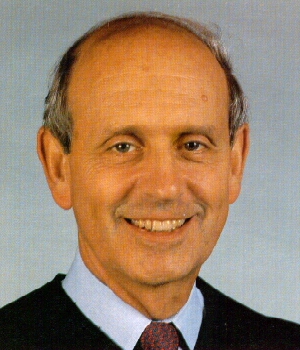 Stephen Breyer is a Justice of the Supreme Court of the United States. He was born August 15, 1938. Breyer has been an Associate Justice since 1994. Breyer generally favors a liberal interpretation of the law; he is pro-choice and pro-civil liberties. Breyer had the second-longest tenure as the most junior justice on the bench. Breyer is also the only justice to appear on a quiz show (Wait Wait Don't Tell Me). Before being a judge, Breyer was a professor at Harvard Law School and a judge on the First Circuit Court of Appeals. Breyer is an Eagle Scout.

All content from Kiddle encyclopedia articles (including the article images and facts) can be freely used under Attribution-ShareAlike license, unless stated otherwise. Cite this article:
Stephen Breyer Facts for Kids. Kiddle Encyclopedia.