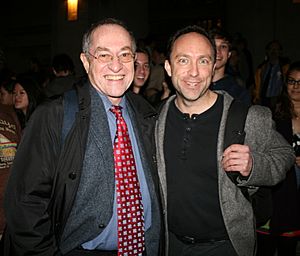 Alan Morton Dershowitz (born September 1, 1938) is an American lawyer, professor, and political commentator who is Jewish. He has spent most of his career at Harvard Law School, where he became the youngest full professor of law in its history in 1967, at the age of 28. He has held the Felix Frankfurter professorship there since 1993. He was born in Brooklyn.

Dershowitz is known for his role in several important legal cases and as a commentator on the Arab–Israeli conflict. As a criminal lawyer, he has won 13 of the 15 murder and attempted murder cases he has handled, and has represented many celebrity clients, such as Mike Tyson, Patty Hearst, Jeffrey Epstein and Jim Bakker. His most famous cases include his role in 1984 in overturning the conviction of Claus von Bülow for the attempted murder of his wife, Sunny, and as the appellate adviser for the defense in the trial of O.J. Simpson in 1995. In 2020, he was hired by President Donald Trump to defend him during his impeachment trial.

He is also a writer (guest columnist/blogger) for The Huffington Post.

All content from Kiddle encyclopedia articles (including the article images and facts) can be freely used under Attribution-ShareAlike license, unless stated otherwise. Cite this article:
Alan Dershowitz Facts for Kids. Kiddle Encyclopedia.