The Bank of America Tower (BOAT) at One Bryant Park is a 1,200 ft (366 m) skyscraper in the Midtown area of Manhattan in New York City. It is located on Avenue of the Americas, between 42nd and 43rd Streets, opposite Bryant Park.

The US$1 billion project was designed by COOKFOX Architects, and advertised to be one of the most efficient and ecologically friendly buildings in the world. It is the fourth tallest building in New York City, after One World Trade Center, 432 Park Avenue, and the Empire State Building, and the sixth tallest building in the United States. Construction was completed in 2009.

The building's Urban Garden Room at 43rd Street and 6th Avenue is open to the public. 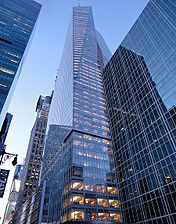 The tower from street level 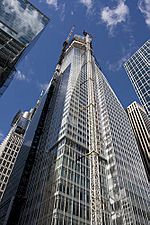 Several buildings were demolished to make way for the tower. Among them was the Hotel Diplomat, a 13-story structure which occupied the site at 108 West 43rd Street since 1911, and Henry Miller's Theatre, which was rebuilt and reopened at its previous location. The building's tenants include Bank of America as the anchor tenant and Marathon Asset Management, and the tower's platinum LEED rating and modern column-free office space has enticed tenants from all over the city. The Bank of America Tower is considered a worldwide model for green architecture in skyscrapers. 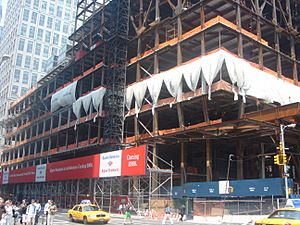 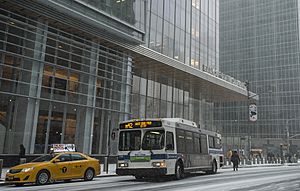 The design of the building makes it environmentally friendly, using technologies such as floor-to-ceiling insulated glazing to contain heat and maximize natural light, and an automatic daylight dimming system. The tower also features a greywater system, which captures rainwater for reuse. Bank of America states that the building is made largely of recycled and recyclable materials. Air entering the building is filtered, as is common, but the air exhausted is cleaned as well. Bank of America Tower is the first skyscraper designed to attain a Platinum LEED Certification.

The Bank of America Tower is constructed using a concrete manufactured with slag, a byproduct of blast furnaces. The mixture used in the tower concrete is 55% cement and 45% slag. The use of slag cement reduces damage to the environment by decreasing the amount of cement needed for the building, which in turn lowers the amount of carbon dioxide greenhouse gas produced through the normal cement manufacturing process. Each ton of regular cement produced creates about one ton of carbon dioxide in the atmosphere.

Temperature control and the production of some of its energy are accomplished in an environmentally friendly manner for the tower. Insulated glazing reduces thermal loss, lowering energy consumption and increasing transparency. Carbon dioxide sensors signal increased fresh air ventilation when elevated levels of carbon dioxide are detected in the building. Conditioned air for the occupants is provided by multiple air column units located in the tenant space that deliver 50 °F air into a raised access floor plenum. This underfloor air system provides users with the ability to control their own space temperature as well as improving the ventilation effectiveness. When building churn occurs, workstation moves can be performed more easily with lower cost and less product waste. The cooling system produces and stores ice during off-peak hours, and allows the ice to melt to help cool the building during peak load, similar to the ice batteries in the 1995 Hotel New Otani Tokyo in Japan. Ice batteries have been used since absorption chillers first made ice commercially available 150 years ago, before the invention of the electric light bulb.

Water conservation features in the tower include waterless urinals, which are estimated to save 8,000,000 US gal (30,000,000 l) of water per year and reduce CO2 emissions by 144,000 lb (65,000 kg) per year (as calculated with the Pacific Institute water-to-air model). The tower has a 4.6-megawatt cogeneration plant, which provides part of the base-load energy requirements.

In summer 2013, the Durst Organization employed Brooklyn Grange Rooftop Farm to install and maintain two honeybee hives on the building. 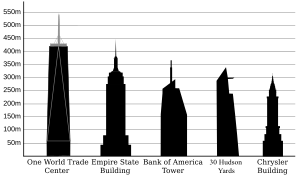 When comparing building height, only the structural height is used according to rules and regulations of the World Council on Tall Buildings. Currently, the New York Times Building and the Chrysler Building are tied for the position of the third tallest buildings in New York City. With the architectural spire included, the structural height of the Bank of America Tower is 1,200 ft (370 m), making it the fourth tallest building in New York City (after One World Trade Center, 432 Park Avenue, and the Empire State Building).

A formal ruling by the Council on Tall Buildings and Urban Habitat has been released, confirming this. 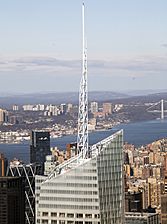 Detail of spire during the day… 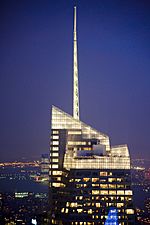 In June 2008, the New York Academy of Sciences launched a podcast that highlights these green features.

In October 2009, the building was featured on episode 100 of the National Geographic Channel television series MegaStructures.

In June 2010, the Bank of America Tower was the recipient of the 2010 Best Tall Building Americas award by the Council on Tall Buildings and Urban Habitat.

Materials fell from the building on three occasions:

All content from Kiddle encyclopedia articles (including the article images and facts) can be freely used under Attribution-ShareAlike license, unless stated otherwise. Cite this article:
Bank of America Tower (Manhattan) Facts for Kids. Kiddle Encyclopedia.