NBC Studios are in the historic 30 Rockefeller Plaza (on Sixth Avenue between 49th and 50th streets) in the borough of Manhattan, New York City. The building has the NBC television network headquarters, its parent NBCUniversal, and NBC's flagship station WNBC (Channel 4). It also has the cable news channel MSNBC. 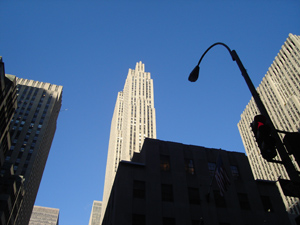 30 Rockefeller Plaza is the world headquarters of NBC. 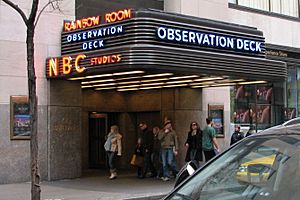 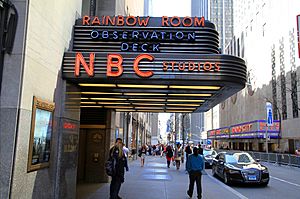 Marquee from the side

The shows that are produced at 30 Rockefeller Plaza (shows taping as of the 2018–19 season in bold):

All content from Kiddle encyclopedia articles (including the article images and facts) can be freely used under Attribution-ShareAlike license, unless stated otherwise. Cite this article:
NBC Studios (New York City) Facts for Kids. Kiddle Encyclopedia.