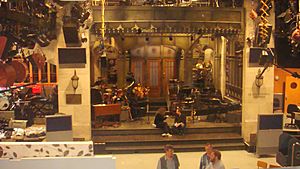 The set of Saturday Night Live in 8H

Studio 8H is a 6,102-square-foot (566.9 m2) television studio in New York City in the United States. The studio is a part of NBC Studios, where the NBC television network is, at 30 Rockefeller Plaza. It is known for having the live recording of Saturday Night Live, which has been shown from the studio since the show's creation in 1975.

Studio 8H was built in 1933. It was meant to be used for orchestras and radio variety programs with big studio audiences. When it was built, Studio 8H was the world's biggest radio studio. It was 132 by 78 feet (40 m × 24 m) feet big, and it was three stories tall, which could fit a full orchestra. It was used for television in 1950, mostly for the live showing of Kraft Television Theatre. 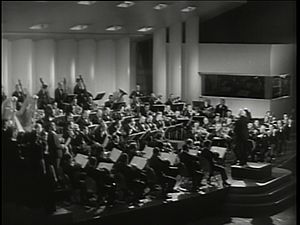 NBC Symphony Orchestra performing in 8H (still from a 1944 film)

All content from Kiddle encyclopedia articles (including the article images and facts) can be freely used under Attribution-ShareAlike license, unless stated otherwise. Cite this article:
Studio 8H Facts for Kids. Kiddle Encyclopedia.