Formerly, the area was the planned site of the now-canceled World Product Center. Both 55 Hudson Yards and the never-built World Product Center were planned to be located on the site of Copacabana, which was at the site between 2001 and January 20, 2007. Located right above the 34th Street subway entrance on the Hudson Park and Boulevard, 55 Hudson Yards was also formerly the site of a FedEx World Service Center building. 55 Hudson Yards was completed by early 2019, with the first tenants occupying the building by April.

The "World Product Center" was a cancelled project that would have been among the world's first permanent healthcare marketplaces and education centers, serving commercial and educational needs of healthcare suppliers and providers. The project featured a 1,011 feet (308 m) tall tower designed by Gary Barnett with up to 1.5 million square feet (140,000 m2) of office space proposed.

The project would have allowed healthcare professionals, students, and researchers to interact with the general public, with an expected 2 million visitors annually. The proposed building included a fully digitized auditorium, conference and educational facilities, media centers, traditional office space, a medical lab, healthcare facilities, and a Consumer Health Pavilion. The Pavilion would have offered the general public guided tours, interactive forums, and information about health literacy and healthcare careers. The World Product Center would have hosted trade shows and other events featuring medical device manufacturers, pharmaceutical companies, and healthcare associations to support healthcare commerce. These events would have showcased medical technologies from the healthcare industry. Participating firms would have received permanent showrooms and exclusive access to all of the center's resources and amenities.

Construction was scheduled to begin in 2009 with a completion date of 2011, but the World Product Center ultimately withdrew from a tenancy deal with would-be developer Extell Development Company.

When the World Product Center was canceled, the site of 555 West 33rd Street became available for development again. The 710-foot-tall (220 m), 51-story 55 Hudson Yards building was designed to take its place, although the building is an office building rather than a medical building.

The building, at 11th Avenue's east side between 33rd and 34th Streets, is located to the north of 35 Hudson Yards, and on the west side of the Hudson Park and Boulevard, adjacent to 50 Hudson Yards and the entrance to the new 34th Street New York City Subway station. Located on the site of the canceled World Product Center, the 1.3-million-square-foot (120,000 m2) building, designed by Eugene Kohn and Kevin Roche, cost US$1 billion. The building is the first collaborative effort between the two firms. In 2013, Extell was paid by The Related Companies in exchange for the 55/One Hudson Yards building, in a deal that allowed Related to develop the site.

Construction was originally not set to start until at least half of the building was pre-leased, but was fast-tracked to 2015. Because of the 7 Subway Extension construction underneath the building, the foundation had already been built; the 55 Hudson Yards building sits over a ventilation building and a station entrance for the extension. Construction started on January 22, 2015, and was expected to be complete by 2019. 55 Hudson Yards was built with a concrete frame, as opposed to a steel frame, in order to speed up construction and lower costs. As of May 2017[update], construction was up to 38 floors and the tower was to be complete by 2018. The tower topped out in August 2017. Tenants began moving into the building in early 2019.

By November 2014, the Japanese real estate investment firm Mitsui Fudosan was looking to buy part of the tower. The move came after J.P. Morgan Chase put forth a proposal to invest in the tower, but later withdrew due to the New York City government's refusal to give J.P. Morgan Chase about US$1.6 billion in subsidies and tax breaks. On December 30, 2014, Mitsui Fudosan bought a 92.09% majority stake in the project for $259 million.

Related announced in December 2018 that French chef Éric Kayser would operate a fine-casual bakery & cafe entitled Maison Kayser that will also offer catering to the nearby office towers. In November 2019, it was announced that Facebook would occupy 57,000 square feet (5,300 m2) of space. 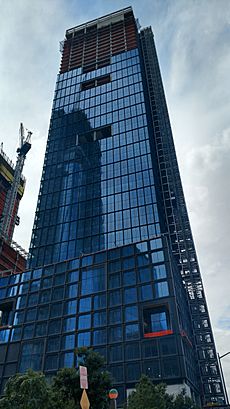 Early projections placed the building as having either 47 or 50 floors, but final plans amounted to 51 stories. (the top floor is a mechanical floor, with office space occupying the fifty floors below it).

In May 2014, renderings for the building changed for the second time. The building's third plan depicted a facade with a mostly metallic overlay and a base larger than the rest of the building. However, the square footage and height remained the same as in the second plan. The building's facade was based on the cast iron facades of buildings in SoHo. 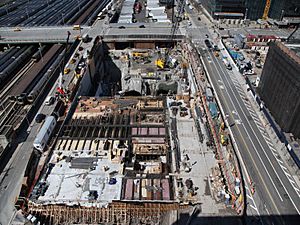 The building has energy-efficient features, and is expected to get a LEED Gold award. Features of the building include destination dispatch elevators; columnless exterior corners featuring floor-to-ceiling windows; and 12 feet (3.7 m) ceilings. To lower costs and allow flexibility during the build, construction emphasized the use of concrete over steel.

The tower includes terraces on the tenth floor and within the tower's interior floors and its base; the tenth-floor terrace overlooks the Hudson Park and Boulevard. The terrace contains an outdoor wooden balcony, as well as 5,000 square feet (465 m2) for landscaping.

All content from Kiddle encyclopedia articles (including the article images and facts) can be freely used under Attribution-ShareAlike license, unless stated otherwise. Cite this article:
55 Hudson Yards Facts for Kids. Kiddle Encyclopedia.