Paramount Plaza (formerly the Uris Building or 1633 Broadway) is a 48-story skyscraper on Broadway in Midtown Manhattan, New York City that houses two Broadway theatres. Rising to 670 ft (204 m), it is the 84th tallest building in New York. 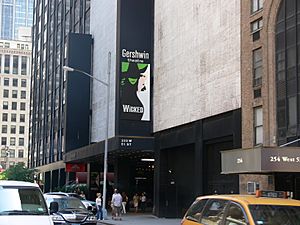 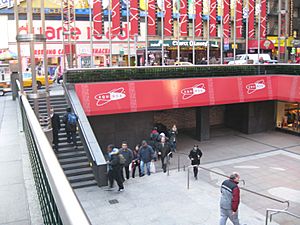 The sunken plaza with subway entrance

The Uris Building, designed by Emery Roth and Sons, was built in 1970 on the site of the former Capitol Theatre movie palace. It was developed by the Uris brothers, who, at the time, claimed to be the largest private real estate developers in New York City. Building the tower demonstrated a confidence in the area surrounding Times Square, which was then in decline.

It was originally called the Uris Building for the developers, and the associated Uris Theatre (later renamed the Gershwin Theatre) is one of the largest Broadway houses. A smaller theatre operated by the non-profit Circle in the Square company is also in the space.

After the death of his brother, Harold Uris sold Uris Building Corp, including this building, to the National Kinney Corporation which in 1974 faced with 30 percent vacancy rates took the building into bankruptcy before the Paramount Investment Group led a partnership that purchased it. The partnership continued to own the structure until 2015 when Paramount Investment purchased the remaining 25 percent. Paramount continued as sole owner until April 2020 when it announced it would sell a ten percent stake.

Paramount renamed the building. Portions of The King of Comedy and Silent Movie were shot there. In September 1999, Nickelodeon opened an animation studio which was primarily took over production for Nick Jr programs. The Uris Theatre was eventually renamed the Gershwin. The southern of the two sunken plazas on Broadway has a gymnasium and an entrance to the 50th Street subway station (1 and ​2 train) of the New York City Subway. Between November 1998 and January 2012, the northern one housed Mars 2112, a theme restaurant that catered to tourists.

The name of German financial services company Allianz was affixed to the top of the building on all four sides.

All content from Kiddle encyclopedia articles (including the article images and facts) can be freely used under Attribution-ShareAlike license, unless stated otherwise. Cite this article:
Paramount Plaza Facts for Kids. Kiddle Encyclopedia.