City Point is a mixed-use multi-building residential and commercial complex in Downtown Brooklyn, New York City. City Point is, by square footage, the largest mixed-use development in the city.

City Point was supported by the New York City Economic Development Corporation as a sustainable mixed-use development for retail and housing. The project was developed by Albee Development LLC and designed by Cook + Fox architects, and aims to be LEED-silver certified. It was expected to create at least 328 construction jobs and 108 permanent jobs.

The complex is built over the northwest entrance to the DeKalb Avenue station on the New York City Subway's B​, ​Q​, and ​R train. It is across the Flatbush Avenue Extension from Long Island University's Brooklyn campus, and across Fleet Street from the future site of 9 DeKalb Avenue. City Point is located on the former site of the Albee Square Mall, and its southern entrance is centered on the Fulton Street Mall near the historic Dime Savings Bank of New York.

In 2004, New York City's office of Economic Development adopted the "Downtown Brooklyn Plan", which consisted of a series of zoning changes and public works. City Point was one of the winning developments proposed, sitting on municipal-owned land, in an area already well-established as a shopping corridor. 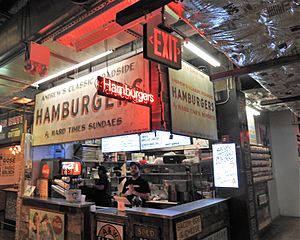 A third tower—City Point Tower III, located at 138 Willoughby Street—is under construction, planned to be 720 feet (220 m) tall, making it the tallest in Brooklyn in 2020. It is planned to contain 458 market-rate condo units taking up 1,082,218 square feet (100,541.3 m2), with three stories of commercial space occupying 502,460 square feet (46,680 m2). Tower III will be doing business as Brooklyn Point and is being designed by the firm Kohn Pedersen Fox. This would be the only for-sale residential development at City Point.

Accessible by entrances on Flatbush Avenue Extension and on Fulton Street is a shopping plaza with big box national chain stores, smaller retail shops, a movie theater, bar, and grocery store, as well as restaurants and a 27,000 square foot food court in the basement of Tower II called DeKalb Market Hall. DeKalb Market Hall has 40 different vendors, small businesses based in the New York City area.

Between the first and second towers is "the podium", within which was built 660,000 square feet (61,000 m2) of retail space, including Century 21 and an Alamo Drafthouse. On January 29, 2017, Target opened its store in City Point Tower II. In September 2020, Century 21 filed for Chapter 11 bankruptcy and announced that they will close all of their nine locations, including at City Point.

All content from Kiddle encyclopedia articles (including the article images and facts) can be freely used under Attribution-ShareAlike license, unless stated otherwise. Cite this article:
City Point (Brooklyn) Facts for Kids. Kiddle Encyclopedia.