List of tallest buildings in Brooklyn facts for kids 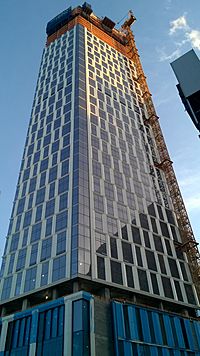 Brooklyn Point in Downtown Brooklyn. At a height of 720 ft (219 m), it has been the tallest building in Brooklyn since April 2019.

Brooklyn, the most populous of New York City's five boroughs, contains over 50 high-rises that stand taller than 295 feet (90 m). Brooklyn Point, a condominium tower in the Downtown neighborhood of the borough, is Brooklyn's tallest building at 720 feet (219 m). The Williamsburgh Savings Bank Tower in Fort Greene, at 512 feet (156 m), was the tallest building in Brooklyn for 80 years from its completion in 1929 until 2009, when The Brooklyner was topped out at 514 feet (157 m). 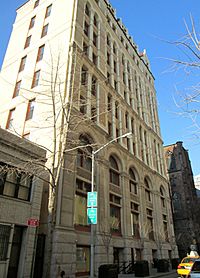 The construction of high-rise buildings in Brooklyn began during the late 19th century, following the completion of the Brooklyn Bridge in 1883 and the building of elevated railroads and streetcar lines during the late 1880s. Increased accessibility to Downtown Brooklyn brought greater economic growth and propagated denser commercial development, which increased the heights of downtown buildings throughout the 1890s. This led to the 1891 construction of Brooklyn's first skyscraper, the 10-story Franklin Trust Company Building. By 1901, the 13-story Temple Bar Building was completed and was the borough's first steel-beam high-rise, its largest office building, and its tallest at 164 feet (50 m). In the early 20th-century, the opening of multiple New York City Subway lines in Downtown Brooklyn spurred further development of tall commercial buildings. The Zoning Resolution of 1916, which required buildings to incorporate setbacks from the street to allow for sunlight, influenced the construction of taller, more slender buildings.

In 2004, several portions of Downtown Brooklyn were rezoned to promote more commercial, residential, and retail development. This rezoning allowed for greater density of development, and combined with an increased demand for housing, these areas experienced a boom in the construction of tall buildings. In addition to Downtown Brooklyn, high-rise buildings are also concentrated in the Brooklyn Heights, Fort Greene, and Williamsburg neighborhoods, although other Brooklyn neighborhoods have significant numbers of high-rises.

Panoramic view of the Downtown Brooklyn skyline in 2005

There are over 50 completed or topped out skyscrapers in Brooklyn that stand at least 295 feet (90 m) tall, based on standard height measurement which includes spires and architectural details but does not include antenna masts. An equal sign (=) following a rank indicates the same height between two or more buildings. An asterisk (*) indicates that the building is still under construction, but has been topped out. The "Year" column indicates the year in which a building was completed.

Tallest buildings under construction or proposed

There are a number of buildings under construction in Brooklyn that are expected to rise at least 295 feet (90 m) in height. 9 DeKalb Avenue, which has started initial construction work relating to foundation preparation, is set to rise over 1,000 feet. If completed, the tower will become the tallest building in the NYC area outside of Manhattan, and the tallest building on Long Island.

This lists buildings that once held the title of tallest building in Brooklyn.

All content from Kiddle encyclopedia articles (including the article images and facts) can be freely used under Attribution-ShareAlike license, unless stated otherwise. Cite this article:
List of tallest buildings in Brooklyn Facts for Kids. Kiddle Encyclopedia.